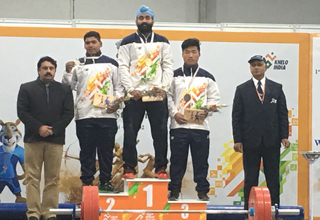 AT News Desk
ITANAGAR, Feb 7: The first medal for Arunachal Pradesh at the ongoing Khelo India School Games in New Delhi was won by weightlifter Nabam Tat on Wednesday.
Tat lifted 95 kg in snatch, 130 kg in clean and jerk for a total of 225 kg in boys’ 94 kg category to win the bronze medal.
However, rest of the athletes of the state, who participated in various events on Wednesday, failed to make further progress.
One of the medal prospects, Laa Tukum lost 15- 21, 15- 21 to Akash Yadav of Uttar Pradesh in boys badminton quarterfinal.
In boxing, Yaro Maying, Tehon Kongkang and Bamang Yape lost their quarterfinal bouts against their respective opponents from Delhi and Haryana.
In archery, Kaidim lost to her opponent from Delhi in elimination round while Ngamlih lost to her opponent from Jharkhand in round of eight.
It was heartbreak for judokas Kamdon Boi and Ayo Mipi as they lost their bronze medal bout against their respective opponents from Delhi and Andhra Pradesh.
Another Judo player Silom Tesia made an early exit after she lost in the round against her opponent from Delhi.