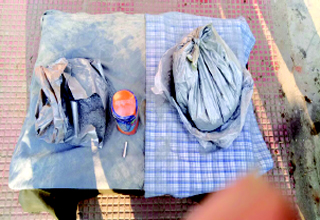 LEKHAPANI, Feb 17: Personnel of the Assam Rifles (AR) apprehended a linkman and four over-ground workers of the United Liberation of Front of Asom (ULFA-Independent) from different places in the last two days.
While the linkman was apprehended from a house in Kotha village on 17 February by troops of the AR’s Lekhapani battalion, the over-ground workers were nabbed from the general area of Malugaon by the Changlang battalion on 16 February, informed Kohima-based Defence Spokesperson Col C Konwer.
The four over-ground ULFA (I) workers, who have been identified as Pradeep Barua (31), Rupam Rajvanshi (27), Munna Shah (20) and Diganta Gogoi (27), all from Tinsukia district, are being handed over to the Margherita police station.
On spot interrogation, the group confessed to supplying weapons from Dimapur to Sadiya and Kakopathar. “They were previously involved in looting, smuggling and extortion activities,” the defence spokesperson said.
While a .22 pistol was seized from the over-ground workers, large quantities of explosives and a detonator were recovered from the possession of the apprehended linkman, who was later handed over to the Lekhapani police station.