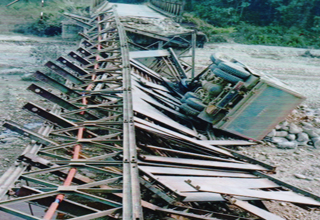 ITANAGAR, Feb 21: The All Pakke-Kessang, Pijeriang, Dissing-Passo, Seijosa Students’ Union (APPDSSU) has in a representation to the Additional Deputy Commissioner, Seijosa, East Kameng district on Tuesday last, demanded early renovation of the collapsed A2 village Bailey bridge.
It claimed that the bridge was damaged when “an overloaded truck belonging to Sannidhi Dharmatha Trust, Seijosa funded by Patanajli Ayurved Pvt. Ltd. Hariduar Camp Tezpur Assam, tried to cross it”.
The union alleged that the truck was carrying 36 tons of cement bags, which was “thrice the capacity of the 10 tonnes weight limit of the bridge” and hence, it gave away.
“With the collapse of the bridge, the only lifeline of the commuters of six villages viz, A3, Goloso, Jolly, Lanka, Murgaso and Dayaso has been severed causing them untold hardship. Moreover, if the bridge is not repaired before monsoon, the general public, especially school children, senior citizens and ill patients will have to face a lot of difficulties,” it claimed.
The union in its representation also alleged that despite repeated complaints made by locals, the Patanjali Ayurved Pvt. Ltd, Hariduar Camp Tezpur Assam is carrying out its work at Seijosa since many months exploiting the natural flora and fauna of the area.
It further served a 15-day ultimatum to the authorities for early renovation of the collapsed Bailey bridge and to carry out eviction drive of all illegal labourers working at the Patanjali Botanical Garden at Seijosa without ILP.
It has threatened to resort to democratic action in case its demands are not met within stipulated time.