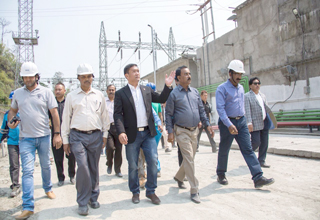 JAMPA, Mar 10: The 110-MW Pare Hydro Project here would be ready for commissioning by the end of this month, said officials of the North Eastern Electric Power Corporation (NEEPCO).
“The project would be ready for commissioning by 31 of this month despite the fact that it would take few more months for it to generate power to its fullest capacity,” the NEEPCO officials assured Chief Minister Pema Khandu, when he, along with a host of ministers and legislators visited the project site at Jampa and Sopo on Saturday to take stock of the progress of the much-awaited hydro project of the state.
The chief minister directed the NEEPCO authorities not to further delay completion of the project and abide by the schedule to go for trial spinning of the turbines by end of this month and commissioning of the same subsequently.
According to NEEPCO officials, the project, which started in 2010, was originally scheduled to be completed by August 2012, but was revised to December 2017. Heavy machineries required could not reach the project site due to construction of the Trans-Arunachal Highway, which caused further delay in its completion, they said.
Pema and the team first visited the dam site at Jampa, where the work is in full swing. The concrete gravity dam on river Dikrong would stand 63 meters high and 134.257 meter long. The run-of-the-river project would have its power house at Sopo, 3 kms downstream of Jampa. The tunnel bringing water from the dam storage is of 1.029 kms.
Later, the team visited the turbine area of the power house at Sopo.
Pema expressed satisfaction over the progress despite several hurdles like monsoon-triggered landslides and floods. He assured cooperation to the NEEPCO with regards to local logistics and administrative issues for commissioning of the project on time.
“This is a big and important project of the state. Not only the local people but all citizens of the state will benefit from it. It is a matter of immense satisfaction that at least one of the several hydro projects in the state is going to be commissioned within a month,” he said while interacting with local villagers near the project site.
The chief minister said that that two percent free power – one from the state share and one from the project developer – would be utilized for local area development. He congratulated the local people for sacrificing their land for the project and said it is time for them to reap the benefits of their sacrifices.
The chief minister also laid the foundation of a bridge over Dikrong that would connect Sopo with Lekhi village on the right-bank. At present, there exists a hanging-bridge constructed locally by the villagers.
He assured the required fund for construction of the bridge, which would be also shared by the NEEPCO as its corporate social responsibility.
To a request for connecting cement concrete (CC) road from the bridge, the chief minister assured to keep provisions in the ensuing budget.
The chief minister was accompanied by his deputy Chowna Mein, Speaker T N Thongdok, Deputy Speaker Tumke Bagra, Power Minister Tamiyo Taga and a host of ministers and legislators. (CMO)