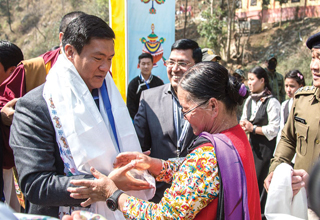 DAHUNG, Mar 21: Chief Minister Pema Khandu has assured the government’s support and cooperation in promoting and preserving the already existing indigenous scripts and those being developed, for teaching in schools of the state.
This, he said, is of utmost necessity for existence and propagation of the indigenous languages that are facing the onslaught of modernization by creating disconnect between the younger generation and their mother tongues.
Attending the closing function of the three-day National Conference on Buddhist Education at the Central Institute of Himalayan Culture Studies (CIHCS) at Dahung under West Kameng district, the chief minister informed that preservation and promotion of indigenous languages through teaching of the same in their original scripts in schools has been amply emphasized in the recent budget announcement.
Pema, a Buddhist himself, said Buddhism gave way to a new form of education that involved living a noble life, and it created the foundations of the modern education system. He called for concerted efforts to spread the teachings of Buddhism that may be the solution to many evils and ills prevailing in today’s world.
Congratulating all attending the conference from various places, Pema hoped their papers on various themes and sub-themes will be incorporated in a single resolution that will be a guiding force for the path forward. He assured to consider suggestions put forward to the state government and also take up with the central government if needed.
He further expressed gratitude to the Union Ministry of Culture for organizing the conference at a small place like CIHCS, Dahung and expressed hope that the three-day conference was a fruitful one. (PRO)