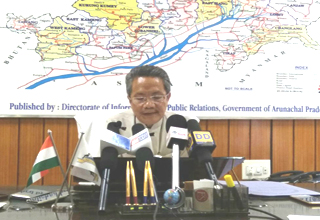 Staff Reporter
ITANAGAR, Apr 20: The State Election Commission (SEC) has announced 29 May as the date of polling for municipality elections to be held in Itanagar and Pasighat, while the panchayat elections are stated to be delayed due to ‘technical reasons’.
There are 30 wards under the Itanagar municipality,with 64,799 electors, and 12 wards under the Pasighat municipality, with 9,646 electors.
State Election Commissioner Hage Kojeen informed on Friday that the notification for the election will be issued on 1 May and the last date for filing nominations is 8 May. The date of scrutiny of papers is 10 May, and the last date for withdrawal of candidature is 14 May.
Votes will be counted on 31 May and the election process will have to be completed by 7 June, Kojeen said, adding that the model code of conduct will come into force from the date of announcement of the elections.
The SEC urged all political parties, party workers, candidates and their agents to abide by the model code of conduct specified by the SEC, which will be made available on the official website www.secap.nic.in.
The commission has appointed two observers for the Itanagar municipality election, and one for the Pasighat municipality election.
Referring to the matter of the panchayat elections, the SEC said the delay has resulted in view of the passing of the Arunachal Pradesh Panchayati Raj (Amendment) Bill by the legislative assembly in May, replacing the existing three-tier panchayati raj system in the state by a two-tier one.
“The commission had earlier moved the proposal for holding the elections as per schedule dated 31 January, 2018, and had requested the state government to convey its concurrence latest by the first week of March, but on getting no reply, reminders were sent to the chief minister’s office on 19 February and 11 April because our scheduled notification date was 13 April, 2018, which expired,” Kojeen said.
The SEC said the state government in its response mentioned that ‘consequential amendments’ are required to be incorporated in various subordinate legislations, like the Arunachal Pradesh Panchayat Raj (Preparation of Electoral Roll) Rules, the Arunachal Pradesh Panchayati Raj (Conduct of Election) Rules, the Arunachal Pradesh Panchayati Raj (Delimitation Constituencies and Reservation of Women) Rules, etc, in view of the recent amendment.
“It was therefore decided by the state government to hold the elections only after completing the aforesaid legal and required processes,” said Kojeen.
The commission has, however, urged the state government to “expeditiously consider” completing the processes to ensure holding of the panchayat elections on time.