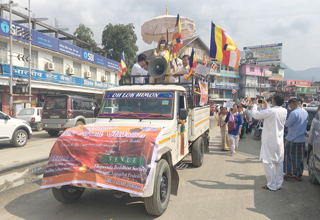 Staff Reporter
ITANAGAR, Apr 30: The 2562nd Buddha Jayanti was celebrated on Monday by the Buddhist community of the state with processional display of Buddha statues and scriptures through the towns and offering of prayers.
Here in the capital, the Theravada Buddhist Society and the Itanagar Buddhist Cultural Society took out the procession from Thuptem Ga-Tseling Monastery near 0 Point Tinali, with young and old carrying Buddhist scriptures all the way to the Theravada Buddha Vihara in Vivek Vihar.
This was followed by the ‘sangha dana’, an offering to the monks (or monastery) by the devotees.
Monks from both the monasteries offered prayers for world peace.
Participating in the celebration, Governor BD Mishra, his wife Neelam Mishra, and Home Minister Kumar Waii paid obeisance at the vihara.
Conveying his greetings to the people, the governor said that the teachings of Lord Buddha are relevant in equal measure even today. “His messages of peace, knowledge, non-violence, uplift of the downtrodden,and freedom from superstitions are the promoters of modern welfare societies,” the governor said.
Quoting a message of Lord Buddha, ‘Health is the greatest gift, contentment the greatest wealth, and faithfulness the best relationship’, Mishra said the Buddha’s teachings “cover all aspects of life and care for the last individual in the last social rung of the society.”
Venerable A Pannasara and Sahitya Akademi awardee YD Thongchi also spoke on the valuable teachings of the Buddha and their relevance in the society then and now.
Earlier, the governor inaugurated a blood donation initiative jointly organised by the Arunachal Vivekananda Yuva Shakti, the Arunachal Voluntary Blood Donor Organization, and the state branch of the Indian Red Cross Society to mark the occasion.
Former minister PW Sona, monks and devotees were also present.
In Namsai, the day was celebrated at the Namsai Pariyatti Sassana Buddhist Vihara, where Deputy Chief Minister Chowna Mein advocated treating all holy places with reverence “as they are not only places of worship but seats for learning moral values and ethics, philosophy of life, and good path of living.”
Reiterating the need to fight the drug menace, Mein urged the community-based organizations of the district to play the lead role in moulding the society in the right direction.
Planning Parliamentary Secretary Chau Zingnu Namchoom also called upon the people to join hands, irrespective of their tribes, and fight the menace.
A procession was taken around Namsai township,and hundreds of Buddhist devotees offered prayers and worshipped the Buddha on the auspicious day. (With inputs from PROs to Governor and DCM)