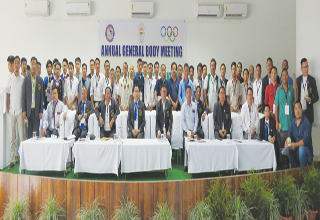 Staff Reporter
ITANAGAR, Apr 30: The Arunachal Olympic Association (AOA) in its annual general body meeting on Monday took a unanimous decision to press for early materialization of the multipurpose indoor stadium in the capital complex.
The meeting discussed various issues plaguing the sports sector, and adopted several resolutions for onward submission to the government.
Some of the major resolutions adopted in the meeting were appointment of persons with sports background as the chairman and vice chairman of the Sports Authority of Arunachal (SAA); relaxation in educational qualification and height while selecting candidates for appointment under the sports quota; enhancement of the annual grant-in-aid for the AOA from the current Rs 1 crore to Rs 2.5 crore; and proper utilization of fund meant for promotion of sports in the state.
The meeting observed that appointment of SAA officials without any knowledge of sports would fail to serve the desired purposes.
It also discussed the issue of termination of former SAA vice chairman Gechi Doke, and majority of the speakers, including Arunachal Pradesh Wushu Association president Toko Teki, sought reconsideration of the termination order by the government, in the interest of development of games and sports in the state.
It may be mentioned here that Doke is one of the longest serving sports officials in the state. He had held the post of general secretary of the Arunachal Pradesh Football Association (APFA) for 25 long years before being appointed as SAA vice chairman.
The meeting, which was attended by the presidents and secretary generals of all the District Olympic Associations (DOA) and state level sports associations, unanimously adopted the resolution that the appointment to the posts of chairman and the vice chairman of the SAA should be made from among persons who have vast knowledge of sports and have contributed in the field of games and sports for not less than 10 years.
Highlighting the myriad of problems plaguing the sports sector, AOA secretary general Abraham Kaya Techi appealed to the state government for early construction of the multipurpose stadium, which is a longstanding demand of the AOA.
Informing that the AOA office has been functioning from a rented house in Naharlagun, he also appealed for establishing an ‘Olympic Bhavan’.
With regard to the state government-sponsored Hangpan Dada Memorial Football and Volleyball Tournaments, the AOA called for involvement of the District Olympic Associations at the district and constituency levels, and the AOA at the state level.
A resolution was also adopted in this regard for submission to the government.
Techi said that involvement of the AOA/DOA in the Hangpan Dada Memorial Tournaments would bring more results, stating that the events should be result-oriented.
The meeting also adopted a resolution to appeal to the chief minister to take over the sports department himself.
Techi also took strong exception to allocation of only Rs 1 crore to the AOA to hold the State Olympic Games, whereas Rs 1.20 crore was provided for organizing a marathon race for promoting sports in the state.
Earlier, he read out the annual activity report of the AOA.
SAA Chairman Bamang Tago gave a brief report on fund allocation and budget proposal of the authority. He informed that a budget proposal of Rs 9 crore had been submitted to the department concerned, in consultation with various sports bodies of the state, out of which, he said, Rs 2.6 crore has already been earmarked.
He also informed about the achievements of sportspersons from the state in various competitions.
Tago said there are a total of 35 sports associations in the state, out of which only 17 or 18 are active. He said that the state has great potential in volleyball but the association is still inactive. There is fund for development of the sport, but no takers, he rued.
Tago urged all the stakeholders to work together for development of sports in the state.
Karate Association of Arunachal president Likha Tara also expressed strong resentment over non-materialization of the multipurpose indoor hall/stadium, despite repeated assurances given by successive governments.
AOA senior vice president Taba Tedir, who also is the chief engineer of the urban development department, informed that the construction of outdoor stadiums in Ziro, Yupia, Pasighat and Daporijo will be completed within this year.
Earlier, Arunachal Pradesh Football Association secretary Kipa Ajay spoke about the difficulties faced due to delay in completion of these outdoor stadiums, and appealed to the AOA to take up the matter with the authorities concerned.
Earlier, the officials of the DOAs and various sports associations highlighted the problems faced by them in promotion and development of games and sports in their areas/districts.
The meeting was presided over by AOA president Padi Richo.