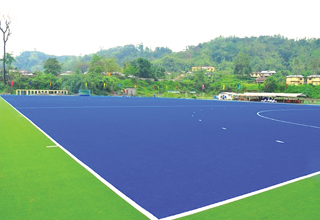 ITANAGAR, May 9: The state’s first artificial (synthetic) hockey turf was inaugurated by Deputy Chief Minister Chowna Mein at the Sangay Lhaden Sports Academy (SLSA) in Chimpu, near here on Wednesday.
Constructed by the engineering wing of the department of sports with an estimated cost of Rs 500 lakhs, the world class hockey ground is the first project of its kind in the state, funded under the ‘Khelo India Scheme’, a flagship programme of the Ministry of Youth Affairs and Sports, Government of India.
Speaking on the occasion, Mein admired the SLSA for its endeavour in tapping the hidden sports talents of the state and for imparting scientific training and coaching to them, besides providing academic education.
He, however, emphasized on providing more training facilities and urged the sports academy to upgrade the level of competitions and produce more sportspersons from the state like that of Manipur.
The deputy chief minister informed that sports facilities will now be extended to the district headquarters too.
Another state-of-the-art sports academy will be established in Tirap, Changlang and Longding (TCL) region, which was announced during the Budget speech.
Seven new major stadiums are coming up at Yupia, Pasighat, Ziro, Daporijo, Chimpu, Aalo and Tezu, out of which, the construction work of Yupia, Pasighat, Ziro and Daporijo is on the verge of completion.
Assuring to strengthen the men power of the Department of Sports & Youth Affairs, Mein asked Parliamentary Secretary for Sports & Youth Affairs Nyamar Karbak, who was also present, to send the proposal to place it before the cabinet.
He also asked the department to submit the DPR for rostrum and public gallery around the hockey and football ground at the SLSA and assured to provide fund for the same.
Deputy Director of Sports (Technical), Heri Robin briefed on the world-class ground and informed that the hockey turf was imported from the USA and international size and standard of the ground were maintained so that national and international games can be conducted on this ground.
He further informed that water supply provision for the ground and cover drain were also installed around the ground to prevent water logging and players can practice in all types of weathers here.
Managing Director, Khelo India, Gumnya Karbak and Deputy Director of Sports, Mala Linggi also spoke on the occasion.
Among others, Sports & Youth Affairs Secretary Dani Salu, Director Sports Tadar Appa, Sports Authority of Arunachal Pradesh Vice Chairman, Doni Nich, Arunachal Olympic Association vice chairman G Doke and All Arunachal Hockey Association president Gumjum Haider were also present on the occasion. (PRO)