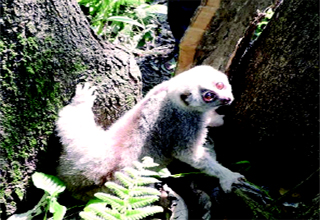 [ Prafulla Kaman ]
PASIGHAT, May 18: Loss of natural habitat and food scarcity are forcing the Bengal slow lorises in East Siang district to stray into human settlement areas.
In the last few years, locals captured at least 10 slow lorises that had strayed into human settlements in different parts of the district. The captured animals were later released in reserved forests by forest officials.
A pair of the animal was caught by residents of Sibo-Siang Colony near here a few days ago, and later the animals were released in Daying Ering Wildlife Sanctuary. Villagers had captured three slow lorises, from Mirbuk, 2-Mile, and Napit villages, in August and September last year.
According to wildlife officials, food scarcity in their natural habitat and human disturbances are forcing the animals to stray into human habitations.
“The primates are either facing disturbances in their habitat due to human encroachment, or are suffering from food scarcity in the forests. However, the actual cause of dispersion is not yet known, as no special study on the species, its population, and factors affecting its habitat has been conducted so far,” said Divisional Forest Officer (Wildlife) Boken Pao, an expert in wildlife management, who is looking after Mouling National Park.
The species is on the International Union for Conservation of Nature’s (IUCN) list of vulnerable animals.
A team of researchers from Guwahati-based Primate Research Centre of North East India had conducted a study on the behaviour of slow lorises in Pakke Tiger Reserve in May 2014. The team in their publication underlined the need to understand the ecological setting and the behaviour of the species in Arunachal’s forests to know the effects of translocation of the species, which may be helpful in conservation of the endangered species.
The report revealed that the population of the slow lorises in the region was on a declining trend.
The Bengal slow loris (Nycticebus bengalensis) or the northern slow loris is one of the five strepsirrhine primate species locally known as Lajuki Bandor (in Assamese) and Besung Raaye (in Adi). These species are distributed in South and Southeast Asia, Bangladesh, the Philippines, and Northeast India.
The slow loris is a nocturnal and arboreal animal which lives both in evergreen and deciduous forests. Its diet primarily consists of fruits, but also includes insects, tree gum, snails, and small vertebrates.