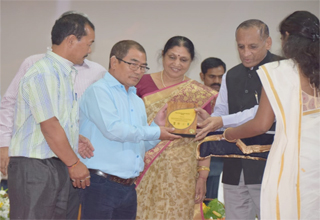 HYDERABAD (Andhra Pradesh), May 22: NGO Singchung Bugun Village Community Reserve (SBVCR) in West Kameng district has bagged the first prize from the National Bio-diversity Authority (NBA) for its unique endeavour in conserving the rare wildlife resources found in the area.
The NBA, which is an independent biodiversity organisation, honoured the NGO by awarding a citation, a memento, and a cash prize of Rs 1 lakh during a function here on Tuesday.
The SBVCR is an NGO which has been partnering with the state forest department since 2016 in protecting and conserving the 17 sq km area of Singchung Bugun village community reserve adjacent to Eagle-nest Wildlife Sanctuary in West Kameng district.
Leaders of the organization, Indi Glow and Sange Norbu Phiang, received the award on behalf of the organization.
Eaglenest Wildlife Sanctuary is spread over about 217 sq kms, with a rich biodiversity second only to the Andes in South America. It is also known for the existence of Bugun liocichla, a bird species presently found only in the sanctuary.
Rich in both flora and fauna, with 545 species of birds and various species of plants and animals, the Eaglenest Wildlife Sanctuary spreads from Ramaligam Camp along the Chaku Tenga road to the plains with varying altitudes from 500 mts from sea level to over 3000 mts.
Notified in October 1989 after bifurcating from the Doimara reserve forest, Eaglenest Wildlife Sanctuary got further prominence with the discovery of the Bugun lipcichla by Dr Ramana Athreya, and attracts the attention of nature lovers from all around the world.
Considering the importance of involving the local community in the conservation process, the forest department under the initiative of the Rupa DFO Millo Tassar persuaded the Bugun community to partner in a unique conservation model under which their community forest covering 17 sq km area near Eaglenest Wildlife Sanctuary is being managed jointly by the forest department and the community.
Started in 2016, the project today is a hugely successful model. The community organizes ecotourism camps for visitors and researchers, numbering in thousands, every year, and gainfully employed the local community members.
The entire sanctuary is efficiently protected under the joint management committee.
When asked about the award, the DFO said, “I believe this prestigious award to the society would encourage them to work harder in conserving the environment.”
He informed that the award has not been given to any other NGO in the state till date and is a great achievement both for the Bugun community and for the state. (DIPR)