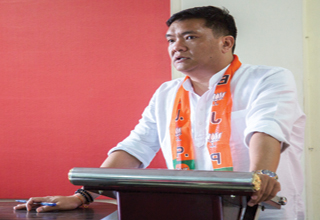 ITANAGAR, May 22: Chief Minister Pema Khandu said the BJP has a big role to play to clean up the system in Arunachal which he said the Congress party had messed up.
“The Congress has made the people of Arunachal mentally corrupt and goes for easy money. If there is any party that can bring Arunachal to a better path, it is only BJP,” the chief minister said during a meeting at the party’s office here on Tuesday. The meeting was held to discuss the celebration of the fourth anniversary of the Modi government, which begins on 26 May.
Speaking during the meeting, which was co-chaired by state BJP president Tapir Gao and attended by all the district presidents, districts-in-charge, and state office bearers, the chief minister urged the party officials to carry forward to the masses the good work carried out by the BJP at the Centre and in the state.
He also urged the party officials to play an active role in disseminating information about the Centre’s and the state’s flagship programmes to the people.
Speaking on the relationship between a party and the government, the chief minister said the party acts as a bridge between the people and the government, and also determines the performance of the government.
He also spoke on the importance of information and communication technology (ICT) in reducing corruption and bringing transparency in governance. He said ICT is being used to improve efficiency and transparency in public administration, and to better communicate with the citizens.
Pema informed that the CM’s Dashboard will be ready by June. The Dashboard will enable the government to monitor the activities of the departments and implementation of schemes in real-time.
He also spoke on the importance of social media in communicating with the people, and said it would play an important role in determining the popularity of the government. (CMO)