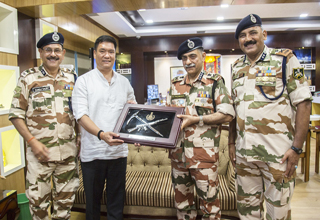 ITANAGAR, May 22: The Indo-Tibetan Border Police (ITBP), which has 10 battalions posted in Arunachal Pradesh, has expressed its willingness to provide pre-recruitment training to the local youths at its headquarters across the state.
Director General (DG) RK Pachnanda, who called on Chief Minister Pema Khandu on Monday, said such pre-recruitment training would equip the local youths attain basic physical fitness required for qualifying in recruitments by the force.
He said the ITBP is willing to offer services like medical and health camps in the border areas of the state at regular intervals.
The chief minister expressed gratitude to the DG for his intent to serve the people of Arunachal Pradesh and offer the services of the force for the welfare of the people of the state.
Reiterating his request for creation of two new battalions exclusively for Arunachali youths, Pema sought cooperation and pursuance of the DG.
He asserted that local youths are physically as well as mentally acclimatized to the difficult terrains and topography of the region.
As the ITBP is a specialized mountain force, he said, the youths of the state would be best suited for the job.
Pachnanda, who is visiting the border outposts in the state, assured his commitment to the proposal and said that it was, in fact, under process.
He urged the state government to pursue it with the union home ministry, saying the ITBP would be more than happy to have any number of battalions consisting exclusively of local youths from the home state.
Till the time such exclusive battalions are created, he said, pre-recruitment trainings would enable more and more local youths to get employed in the force.
The DG further informed that its 10-bedded hospital in Kimin is being upgraded to cater to the medical needs of the civilian populace till a full-fledged hospital comes up at the Yupia ITBP premises.
Pachnanda said the central paramilitary force has been conducting excursions and sporting activities for school students. He said the recent friendship football tournament conducted for the border areas was a huge success with 76 matches played, and suggested the ITBP could nurture children in sports like football, martial arts, mountaineering, etc.
Earlier, the ITBP DG visited the headquarters of the North East Frontier ITBP here and reviewed the operational preparedness of the paramilitary force in the highly sensitive Sino-India border in Arunachal Pradesh region.
He also visited Bhalukpong, Kimin and Yupia on Tuesday morning.
The ITBP DG, who was accompanied by IG (Ops) SS Hartha and IG (NE) MS Rawat, will be visiting the Tawang sector on Wednesday.