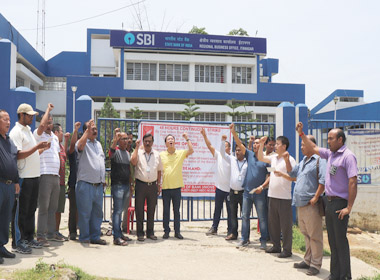 ITANAGAR, May 30: Banking activities in the public sector banks across the country have been interrupted as employees have gone on a two-day nationwide strike against the meagre 2 percent salary hike offered by the management.
However, operations in private banks continue as usual.
Since the strike coincides with the month-end, salary withdrawals from the banks’ branches are likely to get affected. Automated teller machines (ATM) may also take a hit.
Deposit in branches, fixed deposit renewal, government treasury operation, and money market operation will bear the impact of the strike.
Following the failure of several rounds of talks between banks and the employee unions to make any headway, the United Forum of Banking Unions (UFBU), an umbrella body of nine bank unions, has gone on strike against the proposed wage hike of 2 percent as against the 15 percent given the last time.
“It is kind of an insult to the employees of public sector banks to be offered this kind of meagre hike. We had no other option but to go on strike, forgoing two days’ salary. We should not be treated as ox and donkeys on which work is unloaded. People should bear with us and extend their support, thinking of our genuine demand as theirs,” said Itanagar Regional Secretary of the SBI Officers’ Association of NE Circle, Bengia Tabb, who was leading the strike in Itanagar.
“The success of all government schemes, like Mudra, Jan Dhan, and demonetization were ensured by public sector bankers, but the reward is just two percent hike,” he said, terming it “gross injustice to bankers who have worked very hard for nation-building.
“More than 10 lakh employees are participating in the nationwide strike as part of our democratic right by forgoing our salaries, hoping that good sense prevails and the government/management may think for the welfare of its employees. There are about 85,000 branches of 21 public sector banks across the country, having a business share of about 70 percent,” Tabb said.
Meanwhile, the All India Postal Employees’ Union is also on an indefinite strike for more than 15 days,demanding immediate implementation the recommendation of the GDS Committee report.