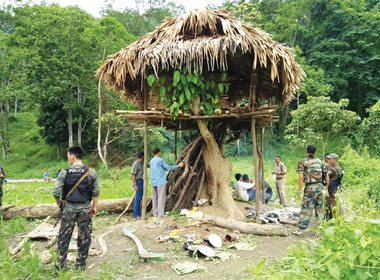 Staff Reporter
DEOMALI, Jun 1: Three persons were killed while one suffered injury in a fierce gun battle between operatives of the NSCN (IM) and the NSCN (U) which took place in an area between Namsang and Sipini villages in Deomali circle of Tirap district on 31 May.
Among the dead were Ranchoan Ngiwang of Paniduria village in Tirap district, and Manwang Konyak @ Raja Pio of Yuching village in Mon district of Nagaland. Both were members of the NSCN (U). The third person who died was a civilian named Rasil Ali, who was a shopkeeper in Deomali.
Another civilian, Gulap Homcha of Namsang village, who sustained injury during the gunfire, was taken to Dibrugarh in Assam for treatment, and is reportedly out of danger now.
“The incident occurred around 7 am in an area between Namsang and Sipini villages. Rasil Ali had been held captive by the NSCN (U) for ransom, and the cadre forced the other civilian, Gulap Homcha, to come to the area,” Tirap SP JK Meena informed.
The SP said the rival groups have been engaged in intensifying their dominance over the area, and the exchange of fire was likely part of their continuing turf war.
“In January this year, the NSCN (IM) outfit had abducted an NSCN (U) member and the latter retaliated by abducting civilians to prove their dominance over the area,” Meena said.
He said the police have lodged an FIR in the matter and investigation is underway.
Meanwhile, Nagaland-based Forum for Naga Reconciliation (FNR) in a statement on Saturday expressed deep concern over the factional violence between the NSCN (IM) and the GPRN/NSCN, and said it was saddened by the loss of human lives and injuries in the aftermath of the violence.
“At a time when Nagas are reasoning together and seeking ways to strengthen the Naga reconciliation process, the factional violence in Deomali undermines the Naga yearning for reconciliation, understanding and harmony.
Such acts of armed violence contradict the commitment and principles of the covenant of reconciliation that calls for ending all factional violence, especially armed violence,” it said.
The FNR appealed to leaders of both the groups involved in the incident to intervene and stop factional violence.
“Further violence should not be allowed to spiral out of this incident. We make this appeal for restraint and urge the two sides to address the issues which caused this violent confrontation by using dialogue and peaceful means,” the statement read.
The Arunachal Naga Students’ Federation (ANSF) has vehemently condemned the incident, and expressed condolences to the bereaved families.
It appealed to both the groups to desist from engaging in senseless violence, “especially when the Indo-Naga peace talks are currently on at New Delhi.”