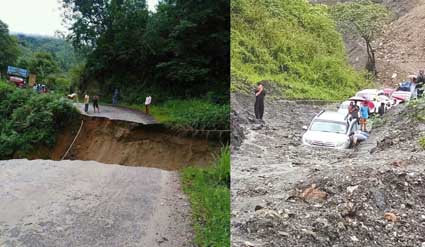 Staff Reporter
ITANAGAR, Jun 14: Incessant rains, especially in the past two days, in the state have caused disruption in surface connectivity in several pockets of the state.
Disaster Management Director K Danggen informed that the level of damage is comparatively low at the moment but reports of communication damages have been received from various districts, with West Kameng and Kra Daadi affected severely.
Inclement weather and incessant rain have completely washed away a portion of the Joram-Koloriang road near Tassar village in Kra Daadi district. The district administration, in collaboration with TK Engineering & Consortium Pvt Ltd, has made a temporary diversion there for light vehicles to ply.
However, the road is not yet conducive to plying of heavy vehicles.
In light of the situation, the Kra Daadi administration has appealed to the public to avoid travelling during heavy rainfall and to restrict plying of heavily-loaded vehicles until the restoration work is completed.
In West Kameng, the Bhalukpong-Bomdila road is currently closed because of landslides. Commuters can, however, use the alternate road via Kalaktang. The Bomdila-Tawang road is open.
While there has been no report of any major natural calamity in the capital region, the Hoj-Potin road in Yupia subdivision witnessed major blockades on Wednesday.
Doimukh Highway Division JE Sanjay Tyagi informed that Kan Nallah and Kala Mitti on the Papu-Yupia-Hoj-Potin road witnessed massive landslides, stranding over 150 cars and passengers.
Although the block points were cleared on Thursday morning, the JE cautioned commuters against travelling the area at night until the rains subside, as the excavators would not be able to clear a path due to poor lighting conditions.
In Anjaw, heavy rains since 9 June have intermittently damaged surface connectivity and affected daily life.
Landslides had occurred between Lautul and Kherang (which connect Hayuliang to Hawai) and were cleared on 13 June by M/s Sushee Infra & Mining Pvt Ltd under the NHIDCL. Work to clear the disruptions in 26 Hollong Nallah and Dhanbari Nallah was underway as on 14 June.
“Connectivity at the bridge point over Moody Nallah at 21 km, which had collapsed on 23 April, is once again overrun by heavy spate of river flow, making it impossible to cross over,” informed DIPRO.
The NHIDCL, which is in charge of the road, and the BCC, represented by the 116 (RCC) GREF OC, has been contacted by Deputy Commissioner Mamata Riba.
Thanking providence that no lives or property were lost, the deputy commissioner reiterated the advisories issued earlier through the district disaster management authorities to maintain caution. She urged the citizens of the district to avoid travelling until the heavy downpour subsides, on account of recurrent landslides in unstable soil conditions.
DSP K Duggong, who visited the block points, is monitoring the ground situation with the district administration. (With inputs from DIPROs)