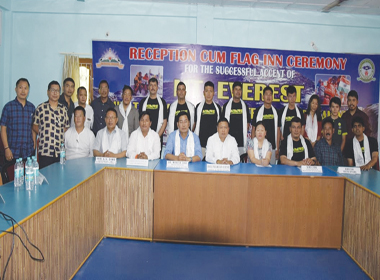 Staff Reporter
CHIMPU, Jun 17: Sports & Youth Affairs (SYA) Minister Dr Mohesh Chai said that his department has a big role to play in harnessing the latent power of the young people of the state.
“We need to groom and channelize the state’s youth power. It is our responsibility to engage them in becoming more actively involved in making positive contributions,” said Dr Chai.
He was addressing the flagging-in ceremony for Everest summiteers from the state – Kishon Tekseng and Taka Tamut – along with the 10-member team of the National Institute of Mountaineering and Allied Sports (NIMAS) which also recently scaled the Everest.
The flagging-in ceremony was held here on Sunday.

Tekseng and Tamut climbed the Everest without the help of any Sherpa on 24 May. They did not use supplementary oxygen upto Camp 4 (26,000ft).
Female Everester Muri Linggi from Lower Dibang Valley district and Tongchen Nimsonga and Dorjee Khandu from West Kameng, who along with the NIMAS team scaled the Everest, were also present on the occasion, along with their co-climbers and NIMAS Director Col Sarfraz Singh.
Mountain terrain bike (MTB) rider Ahendo Menjo of Lower Dibang Valley also attended the function.
Dr Chai, who flagged in Tekseng and Tamut, congratulated all the achievers for making the state and the country proud.
“Following the footprints of Tapi Mra, the first Everester from the state, many youths of the state are now taking up mountaineering passionately, as a result of which the state has seen so many Everesters in the last couple of years,” he said.
It is worth mentioning here that five climbers from the state have scaled Mount Everest this year alone, taking the total number of Everesters from the state to 10.
“Tekseng and Tamut’s Everest expedition is breathtaking. The achievement made by them, defying all odds, is awe-inspiring,” Dr Chai said after listening to the Everester duo’s narration about their expedition.
Earlier, Tekseng and Tamut highlighted the life-threatening risks that they had encountered during their expedition.
Dr Chai, who played for Bengal University football team during his student days, said that he could understand the needs of sportspersons.
“Being an avid sports lover myself, I can understand the needs of the players,” he said, and assured his fullest support to the youth affairs as well as the sports department for all-round development of the sports sector in the state.
Dr Chai also said that it is of utmost necessity that the youths are in good health and make healthy lifestyle choices.
“We must address the issues of the youths. They must be encouraged to engage in sports to ensure their physical wellbeing,” he said.
“Today’s function, though it is a small one, I am sure will go a long way in encouraging all the achievers and many other upcoming adventure-loving youths to achieve greater success in the days to come,” he added.
SYA Parliamentary Secretary Nyamar Karbak advised Everesters Nimsonga and Khandu to submit their Everest expedition papers to the government for recognition.
Youth Affairs Director DK Dinglow highlighted the achievements of his department.
“Various youth development schemes and projects of the Centre could not be availed due to lack of youth officers and coaches for air, land and water adventure sports,” he lamented. He appealed to the SYA minister for creation of at least 10 posts of youth officers and coaches each.
Col Singh apprised the minister of the activities carried out so far by the NIMAS – the only national institute to conduct courses in the field of land, air and aqua adventure sports.
Earlier, MTB rider Ahonda Menjo and Rubi Lomdo were presented with a mountain bike each by the youth affairs directorate. The bikes, costing Rs 2.5 lakh each, were presented by Dr Chai and Karbak.
Menjo won the first position in the WTH Biking Challenge, which was held in Uttarakhand last year. He also won third position in the DNX MTB Championship, Dehradun, and the NTB Tawang Challenge last year.
This year, Menjo won the third position in the MTB Himalayan Terrains, Uttarakhand and the MTB Nainital.
Rubi won the first position in the DNX WTB Championship, which was held in Dehradun last year. She won the third position in the MTB Nainital Challenge, and the second in the WTB Biking Challenge which was held in Dehradun last year.
This year she won the second position in MTB Nainital and the fourth position in the MTB Himalaya (Hero Cycles), which was held in Shimla.
Female Everester and mother of four daughters, Rubi Linggi also highlighted her arduous Everest expedition.
Present on the occasion, among others, were Hayuliang MLA Dasanglu Pul, Sports Authority of Arunachal Vice Chairman Doni Nich, IMF (NE) Chairman KN Damo, and Directorate of Youth Affairs Adventure Cell In-charge Romeo Meetei.
Later, Dr Chai paid a surprise visit to the Sangay Lhaden Sports Academy (SLSA) here and interacted with the students of the school.
During his visit to the boys’ hostel, Dr Chai said he found a cook under the influence of alcohol during duty hours, and instructed the SLSA principal to take necessary action against him.
The minister was accompanied by Youth Affairs Joint Director Ramesh Linggi, other sports officials, and coaches of the school.