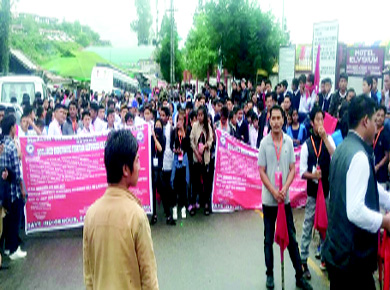 BOMDILA, Jul 13: The Students’ United Movement of All Arunachal (SUMAA) on Friday took out a protest rally here against the Tibetan Rehabilitation Policy (TRP) – 2014 and the “illegal settlement of Tibetans” in West Kameng district.
The organization stated in a press release that SUMAA members led by its president also conducted “spot checking in shops and permanent structures against settlement of Tibetan refugees, wherein shutters and hoardings has been partially damaged.”
The SUMAA team submitted its “ground findings” to the deputy commissioner, it said, and urged the DC to “take immediate action, including cancellation of ST/PRC and trading licence (issued to Tibetan refugees) within 16 July.”
The SUMAA’s ‘Camp Bomdila’ will not be lifted till its demands are met, it said.