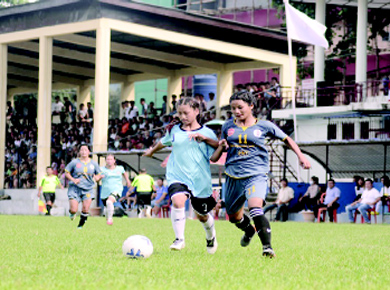 NAHARLAGUN, Jul 15: In a repeat of last year’s final, Capital Complex FC will meet Arunachal SC in the title clash of the Arunachal Women’s League on 17 July.
Asserting their dominance throughout the match, defending champion Capital Complex flattened Upper Subansiri 16-0 in the first semifinal at RG Stadium here on Sunday.
Techi Akung, Roshni Ramching and Tamchi Yapi scored four goals each in a lopsided match, in which the players scored at their will. Other scorers were Techi Amin, Achom Degio, Yoisi Tawsik and Sama.
In the second semifinal, Arunachal SC (ASC) beat Arunachal United FC 4-3 via penalty shootout in a hard-fought match to secure their place in the final.
The match went to tie-breaker after both the teams played out a goalless draw in regulation and extra time.
The final will be played at 3 pm.