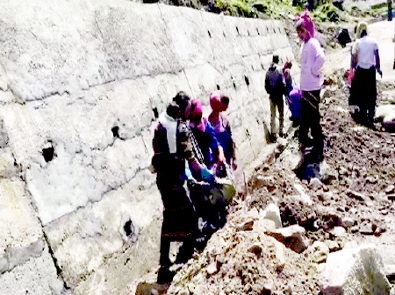 [ Tongam Rina ]
ITANAGAR, Jul 24: The BRO Labourers Union (BROLU) has accused the Border Roads Organization (BRO) of failing to implement basic labour laws and other rights of the workers in the Northeast region.
The union said it has written to the border roads director general for implementation of the laws which have been ignored, and accused the BRO of denying the rights to the labourers since 1960.
“More than 25,000 casual paid labourers are engaged in Arunachal Pradesh under Vartak, Arunank, Brahmank and Udayak projects, without basic facilities, in the remotest border areas,” said BROLU president Leki Tsering.
He said he has written to the BRO regarding implementation of the Labour Law, granting of the Social Security Act, and a regularization policy for the workers with 50% reservation policy in recruitments for vacant posts.
“The workers are engaged on a six -monthly system through muster roll and given a day’s break at the end of six months to avoid regularization of their service,” Tsering said. “Due to this system, not a single worker has got a regular job till today under the BRO.”
The BRO in its response to various representations has said casual paid labourers are engaged in the BRO in terms of the government letter issued on 1 July, 1962, under which their services are liable to be terminated at any time, without notice.
Regarding holidays, Tsering said the workers are entitled to just three days’ national holiday in a year. He said the workers must be given a day off on May Day and all the state-declared holidays.
However, the BRO says the GREF is not an industry but a defence organization, and therefore May Day is not applicable to it.
Apart from three holidays in a year, a BRO worker is entitled to a day off in a week, provided she or he has completed six days of compulsory work.
Tsering also raised objection to the BRO’s fixation of retirement age at 50 years whereas the retirement age is 58 to 60 years under GoI guidelines. According to him, “it is against equal rights as many people are fit to work even after they cross the age of 50 years.”
Though the BRO states that facilities like crèches and nursery/primary schools are provided to labourers, it is an altogether difference scene in Arunachal Pradesh. Mothers carrying their children on their backs while in construction sites are a common sight.
Citing the examples of Tawang and West Kameng districts, Tsering said there are no crèche or school facilities at any of the sites there.
“Children of labourers will end up as labourers because there are no facilities whatsoever for children,” he said.
He also demanded maternity leave for workers. It is common for the workers to go back to the construction site within 15 days of delivery, for fear of losing their jobs.
“There is no specific mention of maternity leave in the 1962 terms and conditions for the BRO workers, under which the organization continues to function.
This daily spoke to Arunachal Pradesh Building & Other Construction Workers Welfare Board Chairman Jalley Sonam regarding the benefits extended to the labourers working with the BRO. (The BRO contributes labour cess to the board.)
“For those labourers to get the benefits, they have to register themselves with the board through the labour department at a fee of Rs 20 per month,” Sonam said.
He said some 400 workers were given beneficiary cards recently, and that the next round of benefits would be handed out in October.
Earlier, Chief Minister Pema Khandu wrote to the Minister of State for Defence Dr Subhash Bhamre, demanding that poor manual workers working under extreme conditions are provided with all the facilities which they rightfully deserve under various statutes, so that they could lead a dignified life while they continue with their unsung contributions in the service of our great nation.
“The local labour force has been rendering their services since 1960 for the BRO, at an average altitude 13000-15000 feet in the remotest and most geographically hostile parts of the state,” the letter read.
Later, the chief minister had met the minister to discuss the labour issues.