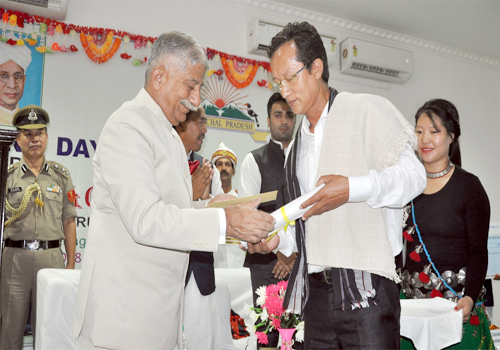 ITANAGAR, Sep 5: Teachers’ Day was celebrated here on Wednesday conferring awards to 39 teachers in recognition of their meritorious services.
Governor BD Mishra, who presented the awards to the teachers at the state banquet hall here, said it is their good effort and dedication that the education scenario is improving in the state.
He called for involvement of all stakeholders to improve the status of education in Arunachal Pradesh.
“Education is the barometer of a civilized society,” the governor said, and called upon all, including parents, politicians and educationists to actively participate in the mission to improve education scenario.
“Every penny meant for the education sector must be spent honestly for more returns; there must be clear vision to create better educational environment in the state,” he said.
Underscoring the challenges in the education sector, the governor said that in the educational programmes, utilization of resources, development of infrastructure and procurement and use of latest training, teaching aids, there must be transparency, accountability, fair policy and even playground for students, and teachers.
He made a special mention of Niranjan Shahoo, a retired teacher, who is still rendering his service gratis to the school, where he was serving, in Kurung Kumey district.
Earlier, the governor recalled the literary accomplishment, educational dedication, nationalism and values of Dr Sarvepalli Radhakrishnan, which he possessed, preached and practiced.
He also released a book, titled ‘Gandhi ji’s Nai Talim’.
Education Minister Honchun Ngandam, Education Secretary Madhu Rani Teotia and Special Secretary (Education) Rahul Singh also spoke on the occasion.
Reports of Teachers’ Day celebration by various schools, colleges and educational institutes, honouring the teachers, have also been received from across the state.
Celebrating the day with the teachers and students of Lekang circle at GHSS, Mahadevpur, Deputy Chief Minister Chowna Mein saluted the teaching community for the sacrifice they have made by rendering relentless service to mould the future of the students.
Speaking about the poor performance of the government schools in the CBSE Examinations in the last two years, Mein said that “to some extent, we may blame the no-detention policy adopted by the previous government in the centre, but at the same time we all have to shoulder the responsibility equally”.
“We need to introspect ourselves, where we are lacking and bring in corrective measures wherever it is required,” the deputy chief minister said.
He exhorted the teachers to be sincere, punctual and put a little more efforts to improve the performance of the government schools in the coming CBSE examinations.
Further, Mein felicitated 14 best performing teachers of Lekang circle on the occasion.
Mahadevpur EAC S Roy, teachers and few students also spoke on the occasion throwing lights on the life of former President of India, Dr Sarvepalli Radhakrishnan.
The Education department organized the Teachers’ Day at the College of Horticulture, Pasighat, wherein retired DSE TapangTaloh, retired DEE BodongYirang, three retired JDSE, five retired DDSEs and 10 retired principals were honoured for their distinguished services.
More than 50 teachers were also felicitated for their exemplary services rendered for the development of education in the state.
Describing the teachers as the torchbearers of the society, Prof Tamo Mibang urged them to discharge duty with utmost sincerity and dedication as the future of the nation lies upon them.
Deputy Commissioner Tamiyo Tatak emphasized the necessity of maintaining strong teacher-student-parent relationship.
Chief Information Commissioner Dr Joram Begi attended the Teachers’ Day celebration at Vivekananda Kendra College of Teacher Education, Nirjuli and felicitated the BEd rank holders of Rajiv Gandhi University from VKCTE.
Attending the celebration at Changlang, MLA Tesam Pongte assured to provide further assistance and better facilities in future for the welfare and interest of the teaching community.
The teachers’ transit camp in Changlang was also inaugurated on the occasion.
At Tawang, the day was celebrated felicitating the teachers of Tawang and Kitpi circles.
Speaking on the occasion, MLA Tsering Tashi hailed the teaching community for its tireless service in moulding the future of children.
Presentations as a token of love from the end of Chief Minister Pema Khandu were also given away to the teachers to honour their services.
As announced during the Independence Day 2018, financial assistances were also given away to the civil service aspirants of the district by the MLA on the occasion.
Similar programmes to mark Teachers’ Day were also organised at Jang and Lumla.
On the occasion, students of Government Secondary School, RGU campus organized a donation drive for the flood victims of Nagaland. The collected amounts will be deposited in the account of Nagaland Chief Minister’s relief fund.
At Don Bosco College, Jollang, the Rector of the College, Fr CC Jose thanked the teachers for their contribution towards the future of the nation and asked the teachers and students to love and respect one another.
Principal, Dr Fr Jose Karamullil also spoke.
The day was also observed at GHSS, Doimukh, KGBV Namsai and VKV Koloriang.