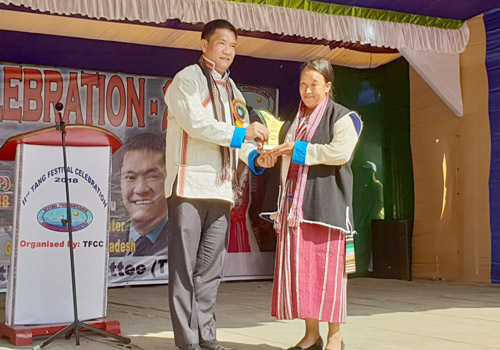 SALARI, Sep 14: Chief Minister Pema Khandu has said the issue of according Scheduled Tribe (ST) status to the Sartang community “is being favorably handled by the union tribal affairs ministry and could materialize soon.”
He said this while attending the Tang festival of the Sartangs at Salari in West Kameng district on Friday.
The chief minister called for promotion of indigenous languages to prevent cultural erosion.
“The department of indigenous affairs is tasked with the responsibility of preserving, promoting and documenting the cultures and traditions of the various tribes of the state, but the onus of sticking to one’s roots and upholding one’s culture and tradition lies with the society concerned,” he said.
Speaking on the ‘Sarkar aapke dwar’ programme, Pema said the flagship programme envisages facilitating various services to the citizens, with the motto ‘One-stop solution to multiple problems’.
However, he expressed dismay over the poor performance by some of the districts, and cautioned that the state government is taking serious note of the matter.
Welcoming the proposal of the locals to take up the Khoitam and Gangri hydropower projects, which could change the economic condition of the people of the area, the CM assured to take up the projects in earnest.
Addressing the vexed issue of the 9 Mile-Nafra road, the CM urged the locals to prioritize road communication over personal gains, and suggested that a middle path be worked out, so that the road, for which Rs 75 crore has been allocated in the first phase, sees the light of day, and the affected people can avoid feeling the pinch by obtaining petty contracts or availing DBT under the PM Awaas Yojana.
Pema also assured to facilitate construction of a playground under the Khelo India scheme. To the demand for creation of two circle offices in the Sartang area, he said he would forward the matter to the chief secretary for the feasibility report.
MLAs Phurpa Tsering and Japu Deru, and SSB DIG Sonam Yudron also spoke.
Among others, MLA Kumsi Sidisow, ex-minister Tsering Gyurme, ex-MLA Rinchin Kharu, and HoDs of Bomdila, Dirang and Nafra attended the festivities. (DIPRO)