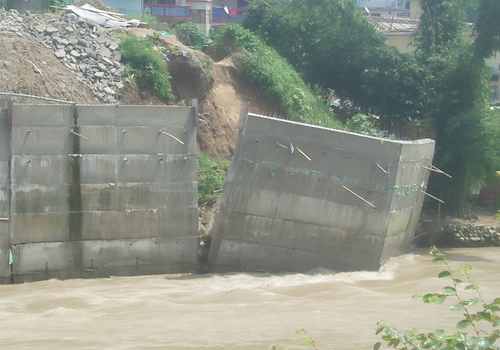 Staff Reporter
NAHARLAGUN, Sep 15: A portion of the poorly-constructed retaining wall along the Dikrong river in Naharlagun gave in following heavy rainfall in the last couple of days.
The retaining wall, which encompasses the boundary of the multipurpose mini-secretariat building here, was constructed a few months back to prevent sinking of the secretariat’s premises close to the river’s bank. It was unable to withstand the torrential rain and part of it gave in on Saturday.
This daily attempted to reach the Naharlagun PWD division executive engineer for comments but could not succeed despite several attempts.