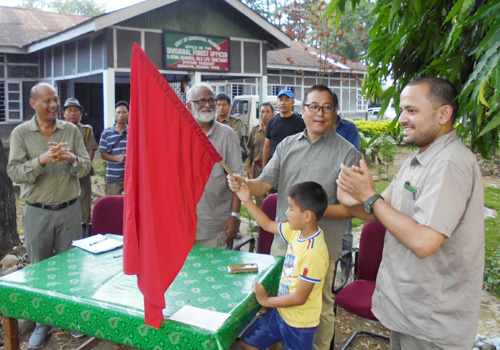 [ Prafulla Kaman ]
PASIGHAT, Sep 30: A team of scientists from the Wildlife Institution of India (WII), Dehradun, arrived here in East Siang district on Saturday to conduct research on wildlife in the Siang region.
The team, led by Dr Abhijeet Das (zoologist), will conduct a comprehensive survey on wildlife, with special focus on extinct and endangered species. Studies on social and economic impact associated with wildlife will also be carried out, besides scientific photography, sound tracking, and documentation of wildlife species.
The team will also survey the historical route of the wildlife survey which was conducted along the Siang river basin by the British during the Abor Expedition in the early 19th century.
The British had conducted an expedition in the Abor jungles, which is presently known as Siang region and comprises Siang, East Siang, West Siang, Lower Siang, and Upper Siang districts.
“After the completion of the survey, the wildlife species found then (Abor Expedition) and now will be compared,” said Dr Das.
The month-long expedition was flagged off from here by former union minister Omak Apang on Saturday.
Apang termed the expedition “very promising” and “challenging” and urged the scientists to have a “micro plan” to carry out their activities.
He exuded confidence that the expedition would explore the rich and varied wildlife in the hill state, and assured to extend all possible help to the team during the expedition.
The expedition is funded by New Delhi-based Hemchand Mohidra Ltd.
The team visited a perennial stream at the Rennging hillside on the outskirts of Pasighat town on Saturday night and recorded the existence of a number aquatic animals, reptiles, and insect species.
The team is being guided by Mouling National Park DFO (Wildlife) Boken Pao, and the expedition is coordinated by Pasighat DFO (D Ering Memorial Wildlife Sanctuary) Tasang Taga.
The team will proceed towards Siang and Upper Siang districts, and culminate their expedition at Geling Nera near the Sino-India border on 25 October.
The other members of the team are Dr Monuj Naik (ornithologist), Dr Bivash Pandav (tiger expert), Dr Navendu Page (plant taxonomist), Bivek Sarkar (entomolgist), Dhritiman Mukherjee (wildlife photographer), and retired professor (wildlife) Sushil Kumar Dutta.