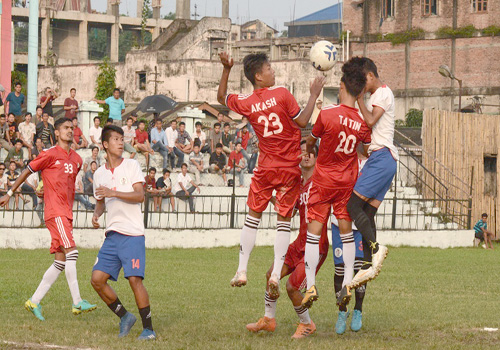 NAHARLAGUN, Oct 3: Gora Makik SC stormed into the final of the Eagle Football Championship beating Capital Complex 2-1 in the first semifinal here on Wednesday.
An error by goalkeeper to judge the movement of ball helped Prahlad Bora of GMSC score the first goal of the match in the 16th minute.
Capital Complex equalized the goal through Biri Pada in 78th minute.
GMSC was awarded a penalty kick after the CCFC defender handled the ball inside the penalty area in the 85th minute. Avinash Kharel converted the spot kick, which turned out to be the match winner.
Despite better ball possession, CCFC failed to come back.
The second semifinal will be played between Deed Circle and Todo United on Thursday at 12.30pm.