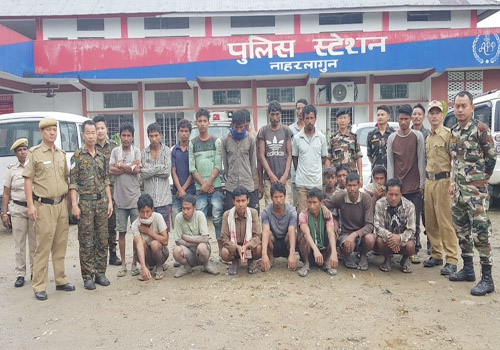 ITANAGAR, Oct 13: Twenty-six persons without Inner Line Permits (ILP) were arrested on the midnight of 12 October at Kankar Nallah by a police team led by Inspector Nikom Riba.
The violators of Section 3 of the Bengal Eastern Frontier Regulation of 1873 were pushed back through the gates from where they came into the state, informed Naharlagun EAC Hento Karga.
The EAC further informed that inner line checks have been intensified and more attention is being given on restricting movement of people without ILPs. He also informed that the violators change their modus operandi of entering illegally into the state through vehicles during night time.
Accordingly, the Capital Complex administration has directed the officers-in-charge of the Naharlagun, Nirjuli and Banderdewa police stations to conduct regular surprise checks at night.
Deputy Commissioner Prince Dhawan has time and again stressed that the district administration has zero tolerance against such violators and appealed to the people to refrain from such illegal activities. (DIPRO)