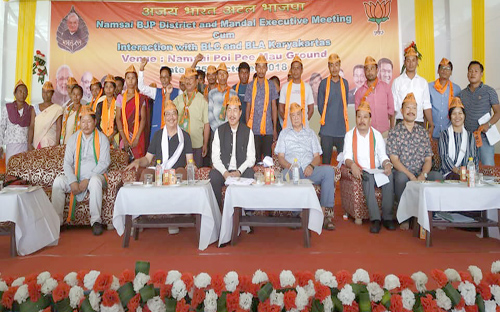 Staff Reporter
NAMSAI, Oct 26: Deputy Chief Minister Chowna Mein on Thursday said the BJP was on the rise in Arunachal Pradesh.
Addressing the district and mandal BJP meeting here, Mein said many people from his Lekang constituency and other parts of the state were willing to join the ruling BJP.
Addressing the party workers, the DCM said the joining of new members into party showed “the growing trust of the masses in the functioning of the BJP government at the Centre and in the state.”
He said this was due to the people-friendly policies, good governance, transparency, and rapid development brought in by the BJP in the state.
Mein also expressed confidence that the party would win all three seats in Namsai district with huge margins in the coming assembly election.
State BJP president Tapir Gao said the BJP would fight the assembly and the Lok Sabha elections in the state on its own, “under the dynamic Chief Minister Pema Khandu and Deputy Chief Minister Chowna Mein.”
He also asserted that the BJP would win the 2019 assembly election with a thumping majority in the 60-member legislative assembly and form the government in the state again.
Chongkham MLA Chow Tewa Mein, Namsai MLA Chau Zingnu Namchoom, secretary and district in-charge Junty Singpho, Namsai BJP president Chow Sujana Namchoom and other office bearers also spoke.
Resolutions related to politics and agriculture were adopted during the meeting. (PRO, DCM)