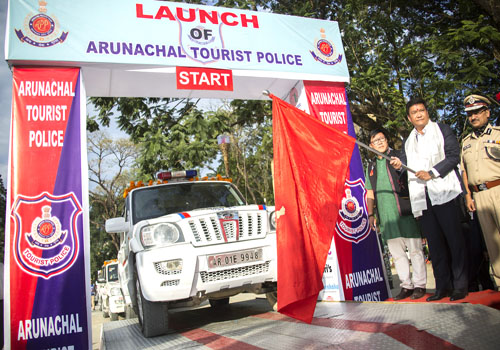 Staff Reporter
ITANAGAR, Nov 2: Chief Minister Pema Khandu launched the state’s tourist police unit and the Arunachal Suraksha mobile app at Dorjee Khandu Convention Centre here on Friday as part of the Arunachal Pradesh Police’ (APP) weeklong raising day programme.
Briefing the attendees on the tourist police unit, Director General of Police SBK Singh informed that 48 personnel of the tourist police would be spread out in the seven districts of the state – Itanagar, Tawang, Ziro, Pasighat, Roing, Namsai and Changlang.
Sixteen SUVs (Scorpio) have been provided for the seven districts. The SUVs are refurbished and fitted with wireless communication equipment and will be manned by specially trained personnel to respond to the needs of tourists.
The DGP said that the tourist police unit, with its distinctive vehicles, uniform, and specialized training in soft skills, language, rules and regulations, would ensure that tourists visiting the state feel safe and secure.
The special unit will also keep a check on unscrupulous taxi drivers and hotel owners.
Welcoming the APP’s initiative to make Arunachal a tourist-friendly state, Pema advised the newly-created police unit to discharge its duties effectively and with dedication.
Highlighting that the tourist inflow has increased over the years, Pema assured to increase the number of vehicles, personnel and equipment in due time.
To complement the efforts of the unit, users can download the Arunachal Suraksha app and find the nearest police station and use a button to make a direct call or send an SOS message to an officer-in-charge or other officers.
Home Minister Kumar Waii in his speech said the new tourist police unit would be “a game changer,” adding that if Arunachal could harness its tourism potential, it would become “the most prosperous state in the country.”
He informed that the tourist police personnel have been selected from among the existing jawans, and said new recruitment would be done as per requirement.
Chief Secretary Satya Gopal said that tourism success depends on tourist safety and service, and commended the establishment of the unit. He informed about the developments taking place in the police department, such as creation of new posts, establishment of new police stations, and recruitment of women police for the safety of women and children.
Later, the CM flagged off the 16 tourist police vehicles.
Among others, top officers the APP, the Indo-Tibetan Border Police and the Sashastra Seema Bal attended the programme. (With inputs from CMO)