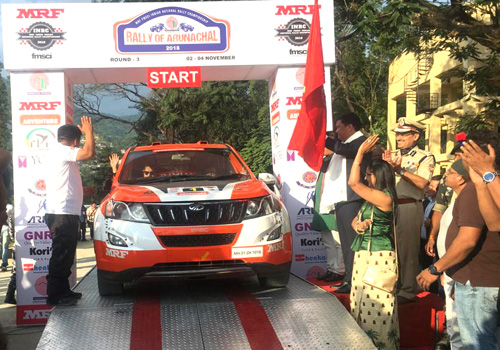 Staff Reporter
ITANAGAR, Nov 2: Chief Minister Pema Khandu flagged off the ‘Rally of Arunachal’ – the third round of MRF FMSCI’s (Federation of the Motorsports Clubs of India) Indian National Rally Championships (INRC) – at Dorjee Khandu State Convention Centre here on Friday.
Meeting with the rallyists, the chief minister said such events would help promote tourism in Arunachal, and that the state looks forward to hosting such events on a larger scale in the days to come as Arunachal offers great destination for adventure tourism.
Arunachal offers great places for off-roading events, he said.
Speaking to this daily, professional rallyist and organising team member Sandeep Sharma informed that the two-day event is being organised by the
Motorsports Club of Arunachal (MSCA) – which is affiliated to the FMSCI – and will culminate on 4 November.
Sponsored by the tourism department and supported by the Arunachal Pradesh Police, the third round of the INRC in Itanagar will witness participation by 17 rally teams of all major automotive companies of the country, including three teams from Nagaland and one from Arunachal.
The first day of the rally on 3 November will witness the flagging off of the special stages from the service park. The special stages will be run in a controlled environment on the national highway for the thrill of the spectators.
Thereafter, there will be four runs from Chimpu to Hollongi and back to Chimpu. This will be followed by three more runs from Chipmu to Hollongi and back to Chimpu on 4 November. The podium ceremony will take place on the same day. (With inputs from CMO)