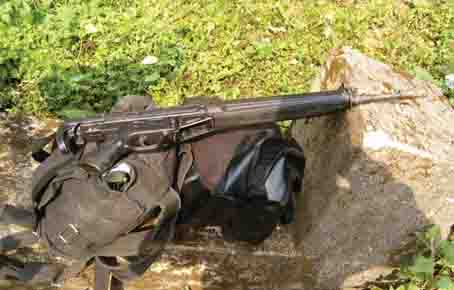 ITANAGAR, Nov 17: A militant was killed in an exchange of fire with security forces in Tirap district on Saturday, defence sources said.
Acting on specific intelligence about NSCN operatives carrying out extortion from villagers, Assam Rifles personnel swiftly launched an operation, Kohima-based Defence Spokesman Col Chiranjeet Konwar said.
But the spokesman did not specify which faction of the NSCN was carrying out extortion.
During a search of the area, the security personnel noticed a few suspected NSCN operatives trying to flee.
“They challenged the militants and asked them to surrender. However, the fleeing militants opened fire on them and they retaliated and brought down controlled effective fire on the fleeing militant and eliminated one operative,” the spokesman said in a release.
The other operatives, however, managed to escape using cover of dense foliage.
During the search that followed, the security forces found the hardcore cadre who had succumbed to bullet injuries.
A HK 33 automatic rifle, large quantities of ammunition and other documents were also recovered from the dead rebel.
The police said that the dead militant belonged to the NSCN (U).
Earlier, personnel of the Jairampur and Changlang battalions of the Assam Rifles (AR) and the Indian Army apprehended five NDFB insurgents and two over-ground workers (OGW) of the NSCN (R) during operations on the night of 15 November.
Biswajit Basumatray alias B Birsha, Birkhang Basumatray alias B Bwsrang, Divika Muchhary alias M Daobaisuli, Sampa Basumatray alias Sarfao and Dwimu Brahma alias B Dwijiri of the NDFB were apprehended from Old Khamdo village in Changlang district by the Jairampur AR battalion while they were trying to infiltrate into Indian territory and escape to Upper Assam, the defence PRO informed.
A large number of arms and ammunition, including four pistols and one carbine, were recovered from their possession, he said.
In another operation, launched by the Changlang AR battalion, two OGWs of the NSCN(R) – Seraj Khan and Sibu Pradhan – were apprehended from Ledo and Margherita in Tinsukia district of Assam.
“On interrogation, both confessed to carrying out extortion in Ledo and Margherita on behalf of the NSCN (R) and acting as OGW for the group,” the PRO said. (With PTI input)