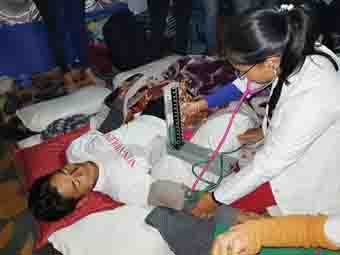 NAHARLAGUN, Nov 21: The Rajiv Gandhi University (RGU) on Wednesday placed an interlocutory application (IA) in the Itanagar permanent bench of the Gauhati High Court to direct the Government of Arunachal Pradesh to bear all the expenses that will be incurred in constituting the expert committee to look into the alleged irregularities in the 22 different subjects of the Arunachal Pradesh Public Service Combined Competitive (Prelims) Examination (APPSCCE) 2017-18.
In the IA, the RGU registrar informed the court that a high-level sitting was conducted on 17 November in the office of the vice chancellor regarding the court’s direction of 14 November to constitute an expert committee.
The meeting noted that it would require 70 subject experts for the 22 different subjects of the APPSCCE (Prelims), which will have to be requisite from various universities in India, for which the applicant (the RGU) will have to bear expenses, such as accommodation, travel expenditure and honorarium among others.
Accordingly, the registrar said that “at least a minimum of Rs 15, 00, 000 will be involved in the entire process.”
As there will be huge financial involvement in constituting the expert committee and since the high court did not give specific direction on who will bear the expenditure, the registrar said that it would be difficult for the RGU to bear the expenditure that may involve requisition of subject experts and it would face immense hardship in complying with the court’s order.
The RGU requested the court to modify and reconsider directing the state government to bear all the expenses that may be incurred by the expert committee headed by the vice chancellor of RGU while evaluating the alleged irregularities in all the 22 subjects.
A hearing has been scheduled in this regard for 22 November.
Earlier, on 14 November, the high court here directed the RGU to constitute an expert committee to look into the alleged anomalies of the APPSCCE (Prelims) 2017-18 and submit a report within 45 days.
The next hearing for the same had been scheduled for 7 January, 2019.
Meanwhile, Chief Minister Pema Khandu assured candidates seeking cancellation of the mains stage of the Arunachal Pradesh Public Service Combined Competitive Examination (APPSCCE) that the matter will be discussed in the upcoming assembly session.
Meeting with a five-member delegation of the candidates at his civil secretariat office on Wednesday, the chief minister expressed concern at the unfortunate situation created in the APPSCCE 2017-18 and recognised that the Arunachal Pradesh Public Service Commission (APPSC) requires reform and restructuring.
He also assured the government’s concerted efforts in bringing an amicable solution, the candidates informed.
Speaking to reporters, a committee member of the candidates said that they are satisfied with the assurance of the chief minister and appealed to Tater Gao to break his indefinite hunger strike.
She, however, said that the movement will continue with a relay hunger strike till the APPSC gives a written assurance protecting their candidature in the APPSCCE (Mains) 2017-18.
Deputy Commissioner Prince Dhawan also assured that they will be allowed to sit in the protest at the IG Park here on the condition that Tater Gao gives up the indefinite hunger strike.
Gao broke his fast late Wednesday evening and the candidates continued with their candlelight vigil at the park here.
On Wednesday evening, candidates that have appeared for all the papers of the mains examination, which concluded on 20 November, appealed to Governor BD Mishra to “not entertain the demands of protestors devoid of any legitimate substance”.
In a memorandum submitted to the governor, the candidates said that they are “against the movement” (by the candidates protesting at IG Park) and sought for the examination process to be completed in its “normal time period”.
Speaking to reporters, candidate Maga Tago informed that a delegation of candidates that have appeared for all their papers of the APPSCCE met the governor and informed him that they have followed all the procedures of the high court and the Arunachal Pradesh Public Service Commission (APPSC) and urged him to “maintain the legality of the examination.”
Tago told reporters that the governor has assured to look into all aspects before taking a decision on the matter. The governor also said that he has sought a report from the APPSC on the number of candidates that have appeared for all their scheduled examinations. However, since the matter is sub judice in court and the APPSC is an independent body, his office cannot give a direction at the moment.
On whether they would go along with the court order if it called for fresh prelims, Tago said “we will respect the decision of the high court and we are ready to give the exam from prelims again if it is the decision of the high court.”
Regarding demand for conducive atmosphere, another candidate, Duyu Nimey said that the atmosphere was “completely fine” till the situation escalated outside the Kingcup Public School (Exam centre).
He said that the future of many other students is on the line if the examination keeps getting delayed.
“If the exam keeps getting delayed then not only will we be deprived, but so will the rest of the students that are in line. Those who could not clear the prelims deserve a second chance in the next examination; students in schools and colleges deserve a shot at the civil service exams,” he said.
They also raised apprehension on the involvement of some faculty members of the Rajiv Gandhi University (RGU) in the agitation against cancellation of the mains examination as the high court here has directed the RGU Vice Chancellor to constitute an expert committee.
The candidates also claimed that 645 candidates have appeared for all their scheduled papers of the APPSCCE (Mains).