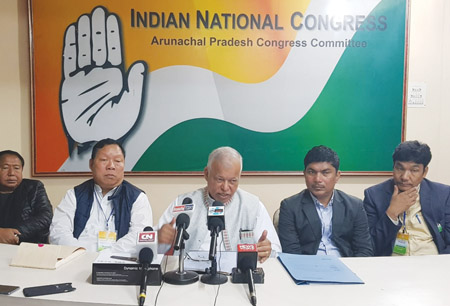 Staff Reporter
ITANAGAR, Dec 20: The Congress party here on Thursday said it would ensure that the BJP is removed from the governance of the country in 2019.
Attending the party’s two-day ‘sangharsh sammelan’ here, All India Congress Committee (AICC) general secretary in charge of Arunachal Pradesh, Luizinho Faleiro, said the state assembly seats would witness new as well as experienced faces as candidates in 2019.
He named Takam Sanjoy, Takam Pario and Nabam Tuki as the “familiar faces,” but refrained from making further suggestions as to the candidates for the 2019 assembly election.
Citing the Congress’ win in Chhattisgarh, Rajasthan and Madhya Pradesh, Faleiro said, “The people have realized that the BJP government and the prime minister have only give slogans for the last five years and no performance, which is why the people have rejected the BJP lock, stock and barrel.”
He said the BJP should be defeated and ousted from Arunachal because Prime Minister Narendra Modi and the BJP “insulted the people of Arunachal when they signed MoUs with China.”
“In their maps, they show Arunachal as part of disputed land of China. It is a shame, it is an insult. These people should have no right to come to Arunachal and rule Arunachal,” he said.
The former chief minister of Goa also claimed that the central government had stopped and withdrawn the grants for development of infrastructure in the state.
“Finances worth nearly Rs 200 crore of projects have been stopped. Arunachal as a special category status was enjoying special privileges from the central government. Today, the planning commission is withdrawn and all the benefits the Arunachal Pradesh government was getting are withdrawn. There is not a single penny spent by the BJP government in Arunachal,” he said.
Faleiro also claimed that the Border Roads Organisation had withdrawn its grants and money, and that there was no money coming in for the national highways either. He said it was a glaring example of the “poor performance, neglect and step-motherly treatment given to the people of Arunachal.
“They (BJP) are inaugurating projects worth some Rs 24,000 crore which were sanctioned by the Congress party,” he said.
Noting that there are only a few months left for the assembly election in Arunachal, Faleiro said the Congress party’s leaders and workers have to “work hard to regain what Arunachal Pradesh has lost since the BJP has come to power in the state… A movement has to start once again in Arunachal to see that Congress is brought back.”
He informed that AICC president Rahul Gandhi would visit Arunachal in January next year to address some 3000-odd booth committee members at the booth presidents’ meeting.
“The movement of the Congress party will start from Arunachal and go to other NE states,” he added.
Arunachal Pradesh Congress Committee (APCC) president Takam Sanjoy said the state Congress would focus on issues like unemployment, especially among college graduates, and move against the alleged multi-crore corruption involved in the Trans-Arunachal Highway (TAH) scam.
“Our main thrust area would be on employment. Even if not in government jobs or industries, our focus will be on providing educated youths with opportunities to make a proper living,” Sanjoy said.
“We will also charge-sheet the government against the TAH scam. When a person without an inch of land gets crores of money under the TAH, it has the licence of the chief minister, the licence of Modi and Kiren Rijiju,” he added.
Sanjoy further said that the state Congress condemned the “lies submitted by the Modi government” to the Supreme Court regarding the Rafale deal.
The APCC congratulated AICC president Rahul Gandhi and UPA chairperson Sonia Gandhi for party’s victories in the Rajasthan, Chhattisgarh and Madhya Pradesh elections.