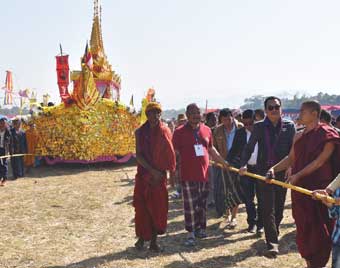 DIBONG, Jan 21: Arunachal Pradesh Deputy CM Chowna Mein requested bikkhu sanghas to go beyond monastic teachings and impart academic and general teaching, too, in monasteries.
The DCM said this on Monday while attending the Poi-Leng (chariot) festival at Dibong Singpho village in Margherita, Assam. The festival is celebrated to pay respects to Guru Agga Mahapandita Dhammadhaja late Ven Wannasara Mahathero, who was the president of the Purbanchal Bhikkhu Sangha, the abbot of the Dibong Bouddha Vihara, and retired principal of the Dibong Pali Vidhyalaya. He attained nirvana on 22 May last year.
“A monastery’s activities should not be confined to religious teachings; it should also be made a centre for academic teaching, learning indigenous scripts and languages, and providing health care facilities to the needy,” Mein said.
He emphasized on preservation and promotion of the indigenous cultures, mother tongues and indigenous scripts, saying “if we do not protect and practice our own culture and speak our own language, then who will come and do for us?
He also urged everyone to respect each other’s religious beliefs.
Mein paid homage to the departed monk, and participated in the chariot pulling (funeral ritual) of Ven Mahathero. He also released a souvenir published in memory of the departed monk.
The festival witnessed participation of a large number of Buddhist monks from Assam and Arunachal Pradesh, besides Margherita MLA Bhaskar Sarmah and thousands of devotees.
The festival is being observed for three days from 20 January. (DCMO)