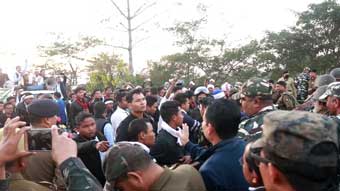 Staff Reporter
NAMSAI, Jan 21: The All Moran Students’ Union (AMSU) and the AMSU-Lekang Regional Committee (LRC) took out a motorcycle rally from Tinsukia in Assam on Monday, but were stopped at the Noa Dihing Bridge here in Namsai district by the police and the administration.
Speaking to reporters, AMSU president Arun Jyoti Moran said, “The Morans have been living in this land for decades. They have been made foreigners in their own land. If the Arunachal Pradesh government cannot provide permanent resident certificates (PRC), then the government should return the land to the Morans,” adding that the demand for PRCs is not new.
Referring to the Indian government’s intention of implementing the citizenship amendment bill (CAB), he said, “The central government can implement the CAB and bring Bangladeshis into the region but cannot give PRCs to us. The Morans living in Arunachal cannot even prove that they are of this land. Why doesn’t the government declare the six communities as foreigners and Bangladeshis as citizens then?”
Arun Moran claimed that the Arunachal Pradesh deputy CM had visited Tinsukia on 3 December, 2018, and given assurance that the non-APST communities residing in Arunachal would be granted PRCs.
“Chief Minister Pema Khandu and Deputy Chief Minister Chowna Mein keep handing us lollipops by repeating their assurances,” he said.
On pulling back the motorcycle rally, he said since it was a first-of-its-kind rally between Assam and Arunachal, the organisations would not use any form of force.
He, however, said if the situation compelled them to stage a second rally, they would intensify the movement.
Arun Moran said the AMSU opposes the CAB and privatization of oil fields. The AMSU is also seeking ST status for Morans in Assam.
Speaking to this daily, AMSU-LRC president Bihudhar Moran informed that they were assured by the on-duty magistrates that the joint high power committee is going to meet on the PRC issue on 23 January.
“We are primarily focusing on Lekang as its residents, most of whom are Morans, are one of the first to seek PRCs. We are using our democratic right to express our resentment at the government for the delay in granting us PRCs,” Bihudhar Moran said.
Another AMSU-LRC member, Horujit Moran, questioned the “irresponsible attitude” of the state government and said no leader has come forward to solve the problem.
“While we are demanding PRCs, some are opposing it. Why hasn’t anyone from the government come to find a middle ground? Jarbom Gamlin and Takam Sanjoy had said that the demand for PRCs is genuine. The Supreme Court has already given three verdicts to grant PRCs, but there is a misunderstanding and no one has come forward to clear that up,” he said.
Meanwhile, raising concern over the economic blockade, the All Tai-Khampti Singpho Students’ Union (ATKSSU) on Monday held a public meeting, and later met with the district administration.
ATKSSU president Chow Kohana Chaupoo informed this daily that they were not for or against anyone at this point but were concerned over the blockade affecting people in the eastern districts.
“We cannot curtail the democratic rights of any community, but it should not be at the cost of our community,” he said, adding that the union received assurance from the administration that talks would be held with the administration of Tinsukia district to sort out the matter.
On whether the ATKSSU supported the demand for PRCs by long-residing non-APST communities in the state, Chaupoo said: “If granting PRCs does not violate the rules and regulations that protect the indigenous people of Arunachal, then we may not have a problem, but with the way things are going, we are concerned whether the government will protect the indigenous rights or not.”
While the economic blockade was in place at several entry gates of eastern Arunachal, the key blockade was from Makum town in Tinsukia district, which is the entry point to different districts of eastern Arunachal.
The AMSU-LRC members said they would hold an executive meeting after the 100-hour economic blockade and take a decision regarding their next course of action.