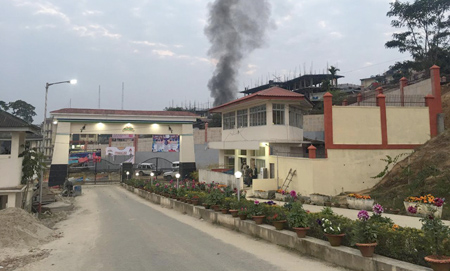 Staff Reporter
ITANAGAR, Feb 22: Protestors went on a rampage in the twin capital towns of Itanagar and Naharlagun on the second day of the 48-hour bandh imposed by several organizations in protest against the joint high power committee’s (JHPC) recommendations on granting PRCs to non-APSTs residing in some districts of the state, even as police fired several rounds of teargas shells to disperse the mobs.
The protestors burned the offices of the All Arunachal Pradesh Students’ Union and the All Nyishi Students’ Union, and destroyed dozens of vehicles, including police vans.
They set the vehicle of a magistrate on duty and a private car ablaze, attacked the personal vehicle of former chief minister and Sagalee MLA Nabam Tuki, and also the vehicle of Capital Complex SP M Harsh Vardhan.
As per latest information, at least five vehicles were set on fire by the protestors.
Two IRBn jawans sustained injuries, one of them grievously, when the stones pelted by the protestors hit them. One jawan who sustained grievous head injury was rushed to a hospital here. 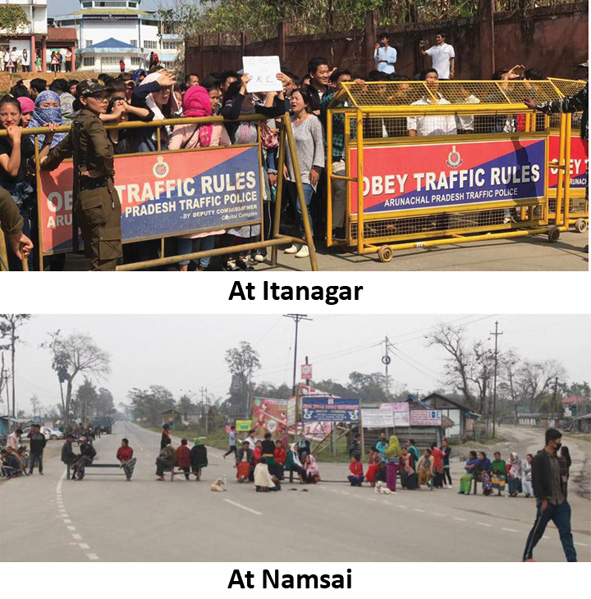 The protesters did not even spare media persons on duty, preventing their movement at various points. They even snatched the key of the scooter of a journalist despite her showing her identity card.
Several media persons, along with many staffers of the state secretariat and members of the public, were stuck in the secretariat premises for hours due to constant stone-pelting from both sides of the national highway by the protestors.
A few media persons, both print and electronic, are still in the secretariat premises till the filing of this report at 9.30 pm. They are not being allowed to leave the premises by the police as the protests continue.
The capital complex has remained shut for two days since Friday. All the business establishments and financial institutions remained closed for the second day on Saturday, while public and private vehicles remained off the road during the bandh period. Attendance in government offices was also thin during the bandh period.
The protestors blocked National Highway 415 at several locations by burning tyres, despite deployment of massive security forces.
In Namsai also, all the traders and businessmen downed shutters for the second day on Saturday. Additional police forces from Lohit and Lower Dibang Valley districts have been deployed in Namsai in apprehension of imminent breach of peace, law and order, in view of the ongoing protests.
The JHPC, after holding parleys with the stakeholders, has recommended granting PRCs to six communities who are not natives of Arunachal Pradesh but have been living in Namsai and Changlang districts for decades.
The proposal has evoked massive resentment among several community-based groups and student organisations, who claim that the rights and the interests of indigenous people would be compromised if the state government accepts it.
Meanwhile, the All Papum Pare District Students’ Union and the All Tagin Students’ union have withdrawn their bandh call.

JHPC recommendations not to be tabled, 144 CrPC clamped

The state government has decided not table the JHPC’s recommendations during the ongoing session of the legislative assembly.
“Keeping in view the present situation, the government has decided not to take the PRC matter in the current assembly session,” tweeted Chief Minister Pema Khandu.
Meanwhile, the home commissioner has directed telecom service providers to suspend internet services for the next 24 hours, in view of the present volatile situation.
The district magistrate has imposed 144 CrPC within the capital complex with immediate effect.