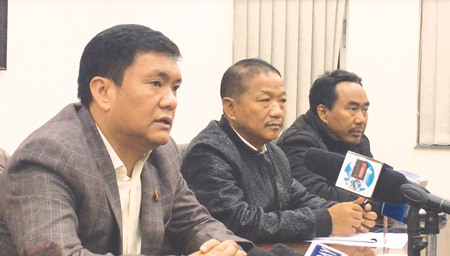 Staff Reporter
ITANAGAR, Feb 25: The capital appeared to slowly limp back to normalcy on Monday after three days of agitation that witnessed the death of three and injuries to several others, besides large-scale destruction of properties.
Chief Minister Pema on Monday held a meeting with representatives of several community-based organisations (CBO), NGOs and student unions.
Addressing a press conference at the civil secretariat in the evening, Khandu said it was decided during the meeting that a peace committee would be constituted to maintain peace and tranquility in the state capital.
Appealing to the citizens of the state to remain calm in the greater interest of the state, the CM reiterated that the PRC issue would not be tabled in the assembly.
He also informed that, although he had called an all-party meeting on Monday to discuss the situation, “no other party, apart from the BJP, attended the meet.”
On Arunachal Pradesh Congress Committee president Takam Sanjoy’s claim that the Congress had not been invited to the meeting, Khandu asserted that official letters were dispatched to all political parties here.
Replying to a query on whether the government would compensate for the damages caused to public and private properties, and to the equipment of the artistes who had come to Itanagar to perform during the Statehood Day celebration, Khandu informed that an assessment committee will be constituted to assess the losses and look into the reports.
Stating that the matter was no longer the PRC issue as he had clearly announced that
the issue had been buried, Khandu said a commissioner-level inquiry will be held to investigate the facts behind the protests that occurred in the past three-four days.
“It is not a PRC matter anymore when public property, private homes and shops were attacked. We have already buried the PRC matter. We think someone is monitoring it (the protests) to blame the government. Names will come up as the acts were highly organised,” he said, without taking any names.
The CM also nullified claims that President’s Rule would be imposed in the state, and said it was “Congress politics.”
On how the non-APSTs seeking PRCs would react to the burial of the PRC issue, Khandu said Deputy CM Chowna Mein has been assigned with the responsibility of speaking with the people to resolve the matter.
On demands for his resignation, the CM said, “The reasons for resignation should be reasonable.”
“Earlier, the indigenous people of the areas had supported granting PRCs to the non-APSTs (of two districts) and we had assured of a decision; but we also have to see the pulse of the state, which is why we have dropped it,” he said.
The CM said the situation in the capital is expected to return to normal by Tuesday. He appealed to the shopkeepers to open their shops for business, and urged the citizens to carry on with their daily activities.
The CM, however, said restoration of internet services “will be on hold” to avert the spreading of unauthentic reports that may flare up the situation.

Chief Minister Pema Khandu on Monday announced ex gratia of Rs 20 lakhs for the families of those who succumbed to their injuries during the protests in the capital complex, along with the assurance of providing government jobs to the next of kin of the deceased.
The CM also announced ex gratia of upto Rs 10 lakhs for those who were injured in the clashes that took place since 21 February.