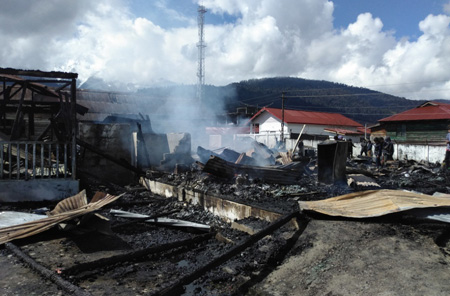 Staff Reporter
MECHUKHA, Mar 3: At least six shops and the panchayat hall were gutted in a fire that broke out at Gandhi Market here in Shi-Yomi district at around 2.30 am on Friday.
The fire reportedly burnt down grocery, furniture, utensil and mobile phones shops, besides a beauty parlour and the panchayat hall.
In a bid to stop the fire from spreading further, the public had to dismantle the post office immediately. In the meantime, a fire tender from the Indian Air force reached the spot and managed to douse the flames.
Though no casualties have been reported, properties worth lakhs of rupees have reportedly been lost in the inferno.
The exact cause of the fire is yet to be ascertained.
Despite being one of the oldest sub-divisional headquarters of the state, Mechukha is yet to be equipped with a fire station.
Student organizations and civil society groups here have repeatedly pleaded with the authority concerned to establish a fire station in the town.