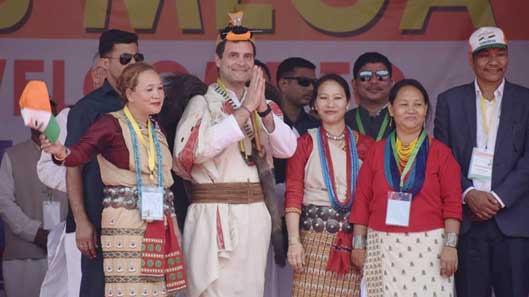 Staff Reporter
ITANAGAR, Mar 19: Congress president Rahul Gandhi on Tuesday addressed a massive rally at IG Park here and wooed the public with apparent ease and flair.
Gandhi was on a visit to campaign for the party in the run-up to the assembly and Lok Sabha elections. Ecstatic Congress workers gave him a thunderous welcome, and responded to his speech with hysteric cheers.
Targeting the BJP and its ideological partner RSS, Gandhi said the RSS was trying to forcibly impose its ideology across the country.
“The RSS and the BJP want to impose their ideology on the whole country. They are capturing universities by appointing people with RSS background as vice chancellors and without any merit. These narrow-minded people do not allow the growth of the universities. They are against students who question the ruling government,” said Gandhi.
He said the Congress party understands that Arunachal Pradesh needs better infrastructure to catch up with the rest of the country.
“Arunachal needs more airports, helipads, colleges, universities and roads to develop in the true sense. For the last five years, the Narendra Modi-led BJP government has given nothing to Arunachal Pradesh. To make matters worse, the special category state tag, along with the North East Industrial Policy (NEIP) and Special Plan Assistance (SPA) schemes have all been withdrawn from the region,” said Gandhi.
He added: “Being hilly, the NE states face unique challenges, unlike north and central India, and therefore the special status was given by the past Congress government. But the BJP government scrapped it and has not offered anything new to the region.”
The Congress president gave assurance that, if voted back to power, the party would restore the special category state tag along with NEIP and the SPA schemes.
Gandhi also said the Congress would always oppose the citizenship amendment bill (CAB).
“This bill is against the Northeastern people and will pose a threat to the region’s rich cultures, traditions and languages. We will oppose the CAB to protect the rights of the indigenous people of the Northeast,” he said.
“The Congress respects the rich cultures, traditions and languages of Arunachal, and considers it an integral part of the country. We will always work to protect the tribal identity of the state. In fact, India is incomplete without the tribal cultures and traditions of Arunachal Pradesh,” Gandhi said.
He also came down on the state government over the police firing that occurred during the recent anti-PRC agitation in the capital.
“Recently, I met anti-PRC agitation victims at Guwahati. I fail to understand why the state government did not initiate dialogue with the agitators to resolve the issue and instead resorted to firing. Why can’t the state government talk to their own people? Using brute force to crush any dissidence is the nature of the BJP and the RSS,” he said.
Gandhi also said the scrapping of the Planning Commission and establishing the NITI Aayog has not yielded any positive result.
“Nobody knows what the NITI Aayog is doing. But these days the developmental plans for Arunachal are being decided by those sitting in Delhi. During the time of the Planning Commission, the states had the right to plan their development as per the needs of their populations. We strongly believe that the people of Arunachal should have the right to decide what they want, and the Planning Commission was the best for the purpose. Why should Delhi decide the future of this state?” Gandhi said.
The Congress president also questioned the patriotism of the BJP.
“When the Pulwama attack took place, we cancelled all political programmes to mourn along with the rest of the country, but Modi was busy shooting at the Corbett National Park – and the BJP has the audacity to question us about nationalism,” Gandhi said.
Reminding the BJP of its promises, he said, “What happened to the promise of two crore jobs annually for the youths of India? Where is Rs 15 lakhs, and where is the black money? Modi only goes around lying and helping his few capitalist friends. GST and demonetization have been disasters for the country. Also, the Rafale deal is the biggest scam to hit the country.”
Gandhi also announced that the Congress would launch a guaranteed minimum scheme in the country if it is voted back to power.
Earlier, several Congress leaders addressed the gathering.
Mebo MLA Lombo Tayeng, who recently joined the party, alleged that the ideology followed by the BJP was against tribal ethics.
“In the BJP, every party programme has a religious touch. They follow non-tribal tradition and do not respect our tribal sentiments. Too many religious programmes almost suffocated us. We need a party which is tribal in character and is truly led by tribal leaders,” said Tayeng.
AICC secretary in charge of Arunachal, Zenith Sangma, alleged that the BJP “is an anti-tribal party and is trying to impose food habits of a certain community on the whole country.”
He said the Congress would fight the BJP on ideological grounds and defeat the BJP in Arunachal Pradesh.
APCC president Takam Sanjoy, former chief minister Nabam Tuki, CLP leader Takam Pario, MP Ninong Ering, former minister L Wanglet and MLA Tanga Byaling, among others, were present on the occasion.