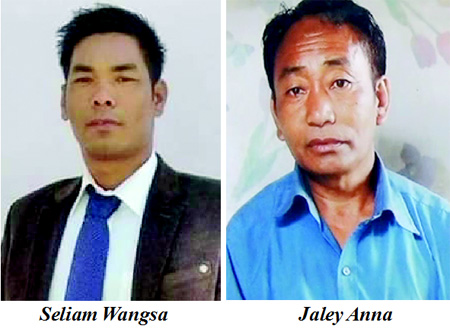 ITANAGAR, Mar 31: Seliam Wangsa, a 39-year-old former zilla parishad member, was killed at Nginu village in Longding district by suspected NSCN militants on Saturday night.
According to an official source, Wangsa was killed by three suspected militants in combat dresses.
It is not clear yet which group of the NSCN is responsible for Wangsa’s killing.
According to those who knew him, Wangsa was a former member of the NSCN (IM) who had surrendered in 2014 before the government authorities. He had reportedly joined the organization in 2006.
Earlier, prior to Saturday’s fatal event, he had survived a gun attack.
On Friday, 52-year-old Jaley Anna from Kheti village in Tirap district died after being tortured by suspected members of the NSCN (IM).
Anna’s killing prompted a massive protest in Khonsa on Saturday, where thousands of people came out, asking the NSCN cadres to go back. Many protestors were seen weeping.
Addressing the people, NPP candidate for the Khonsa West constituency, Tirong Aboh, said “politicians who do not have the guts to fight elections on their own merit should not use underground elements.”
He also requested the Election Commission of India (ECI) to provide security to ensure free and fair elections.
Speaking at the protest rally, Wanglin Lowangdong, former speaker of the Arunachal legislative assembly and the current Congress candidate for the Borduria-Bogapani constituency, appealed to the government and the ECI to ensure that elections are conducted in peaceful and fair manner.
As he appealed for peace, Lowangdong said, “We cannot let senseless killing overtake us… We cannot allow Tirap to be ruled by such brutal elements.”
The killings have angered the people of Tirap and Longding.
Many people from Kheti village expressed unwillingness to take part in the election process. It remains to be seen what the final outcome will be, but the people are angered by the lack of response from their political leaders.
“With the exception of Lowangdong and Aboh, none of the other candidates came for the protest rally, which shows that they are scared to even show their solidarity. They are part of the problem,” said a citizen this daily spoke to.
“The two districts have seen turf wars among various factions of the NSCN. Now with the elections, all the factions are active and various political parties are using these groups,” said another.
The interference of various factions of the NSCN in electoral politics is not new in the two districts, but the latest killings have angered and shocked the people.
Wangsa was with the BJP while Anna was a supporter of the NPP.
A congress candidate from Lazu in Tirap was forced to withdraw his candidature, allegedly by the NSCN (IM).
“We are tired of being political scapegoats. Tirap has seen brutal killings at the hands of various factions of the NSCN,” said a relative of former MP Wangcha Rajkumar, who was assassinated in 2007 in Deomali.
Rajkumar was a vocal critic of the NSCN (IM).
“All factions of the NSCN are paid miscreants,” said another.
The NSCN (IM), the NSCN (K), the NSCN (U), and the NSCN (R) are active in the two districts.
While the districts have seen turf wars among all the groups, the NSCN (IM) has been the most active, even though the group reached a framework agreement for a lasting Indo-Naga solution with the Centre in 2015. The details of the agreement are yet to be made public.
Meanwhile, there are fears that there may be more killings as the state goes to simultaneous polls on 11 April. (None of the people this daily spoke to wanted their names to be revealed.)