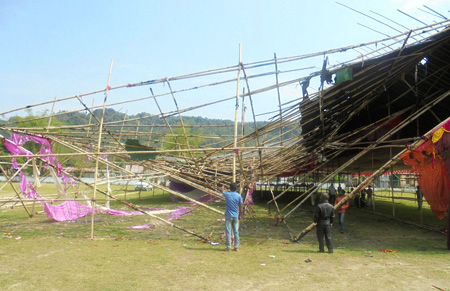 Correspondent
LIKABALI, Apr 5: The political rivalry among the parties and contesting candidates here took an ugly turn when some unidentified miscreants set fire to a BJP pandal here in Lower Siang district in the wee hours of Friday.
The pandal had been set up at the football ground by the BJP for a party rally on Saturday. The fire had damaged a major portion of the pandal before the fire tenders arrived.
The BJP leaders here said the arson was the handiwork of some political opponents.
“Some political opponents are worried over the BJP’s winning prospect here and they are instigating such
immoral activities to demoralize our party workers,” said Lower Siang BJP in-charge Techi Necha.
District BJP spokesperson Mikjom Taso and other BJP leaders also condemned the act and said setting fire to any house or structure is considered a “moral offence” in the Galo society.
Senior police officials and the district magistrate visited the spot and took stock of the situation.
The police said they rushed fire tenders immediately after receiving information about the incident at around 4.15 am. A case has been lodged at the police station here and investigation is underway.
Meanwhile, the BJP has repaired the damaged pandal and made it ready for conducting the poll rally as per the schedule.
Chief Minister Pema Khandu and the BJP’s Arunachal West MP candidate, Kiren Rijiju, are expected to address the rally.