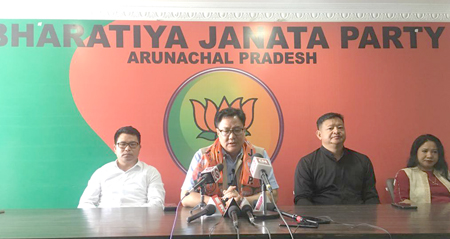 ITANAGAR, Apr 9: Endorsing the Bharatiya Janata Party’s (BJP) manifesto, Union MoS for Home Kiren Rijiju said the BJP is committed to the citizenship amendment bill (CAB), but gave assurance that talks would be held with the people of the Northeast regarding the bill.
Addressing reporters at the BJP office here on Tuesday, Rijiju said there would be
a “special provision” for the Northeast before the CAB’s implementation, and that the National Register of Citizens (NRC) would also be introduced.
While he made no mention of taking any measures to take the CAB issue off the BJP’s manifesto, he said, “We will speak to the people of the Northeast. The government will not initiate any steps without speaking to the people of the Northeast. This is a written commitment of the party.”
On whether the issue would affect the election prospects of the BJP in the Northeast, the MoS said talks would be held with the states of Assam, Tripura and Meghalaya as they are not protected by any laws, unlike Arunachal, Mizoram and Nagaland, and added that the protected states have little to worry about.
Regarding the strong opposition to the CAB in the region, particularly by the National People’s Party’s president and Meghalaya Chief Minister Conrad K Sangma, Rijiju reiterated that “talks will be held” with the Northeast states.
He went on to speak about the introduction of the NRC, and how “only the indigenous people of the Northeast will be registered under it.”
Rijiju, who is the BJP’s Arunachal West parliamentary candidate, said, “Those registered in the NRC will be our citizens. Others cannot be diluted into it. The NRC will also stop illegal entry of immigrants to the country. The minority communities who will arrive as victims of persecution can get citizenship anywhere in India, but for the Northeast, they will be brought only after special provisions are made.”
When asked whether the introduction of the NRC was a metaphorical ‘lollypop’ to pacify the people of the Northeast in the current election scenario, Rijiju said, “You will find out soon after the elections on how we stand by our commitments.”
Meanwhile, Jarjum Ete, who is also a candidate for the Arunachal West parliamentary seat from the Janata Dal (Secular), came out against the BJP for placing the CAB in its manifesto.
“The CAB was protested all across the seven Northeast states by youths and community-based organisations collectively. The larger future ramifications of the CAB are for all of us to see,” she pointed out.
Questioning BJP national president Amit Shah’s “temerity” to come to Assam and declare that the BJP would bring back the CAB if the party gets back to power in Delhi, Ete said it was “a big challenge to all of us.”
“It would not be fair on the part of knowledgeable, discerning people of the Northeast, particularly of Arunachal Pradesh, to vote for the BJP’s parliamentarians, especially if they really care for the future of Arunachal,” she said.
Noting that the protest against the permanent resident certificate, in comparison to the CAB, is a domestic issue, Ete cautioned that the CAB could “open the floodgate of illegal migrants and refugees.”