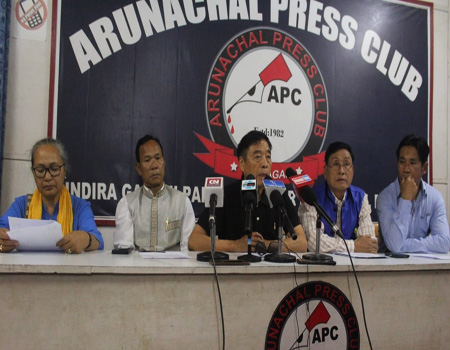 Staff Reporter
ITANAGAR, Apr 18: Candidates of the Janata Dal (Secular) party have expressed serious concern over the malfunctioning of the electronic voting machines (EVM) at various polling stations in the recent simultaneous elections.
They said the malfunctioning of the EVMs posed a high risk of poll rigging and tampering, possibly to predetermine the election results.
Casting doubt over the reliability of the EVMs, former chief minister and the JD(S)’ MLA candidate for Yingkiong, Gegong Apang, on Thursday said, “The malfunctioning of the EVMs may possibly have an effect on the poll results, and replacing them comes with a high risk of poll rigging and tampering.”
Apang also expressed dissatisfaction over the way the state’s election commission conducted the elections.
“We are not satisfied with the election commission, the way it conducted the simultaneous elections in Arunachal Pradesh. Elections have to be carried out after full preparations, but it didn’t happen here,” he said.
Apang along with the JD(S)’ candidate for the Raga assembly constituency, Kabak Takum, Aalo West candidate Nyadar Loya, and Arunachal West parliamentary candidate Jarjum Ete addressed media persons at Arunachal Press Club here ahead of the re-polling at various polling stations on 20 April.
The candidates appealed to the voters to maintain peace and exercise their adult franchise with true spirit.
“Resorting to violence, poll-rigging and booth-capturing violates the basic tenets of democracy,” Ete said.
She termed the incidents of poll-related violence which occurred at several polling stations “very unfortunate,” adding that it was high time elections were conducted with sincerity.
Ete also expressed concern over the malfunctioning of the EVMs at several polling stations, and cited reports from her polling agents that her signature was missing from the EVMs in some of the polling stations.
“The preparedness for the elections, in terms of the EVMs, was not upto the mark,” she said, and expressed hope that the mistake would not be repeated during re-polling.
Ete urged the voters and the polling officials to assist each other in order to ensure free and fair re-polling.
Takum on his part condemned the poll-related violence which occurred in several places, particularly in Kurung Kumey district.
Blaming the BJP for “creating fear psychosis among the people ahead of the polls,” he appealed for peaceful and fair re-polling.