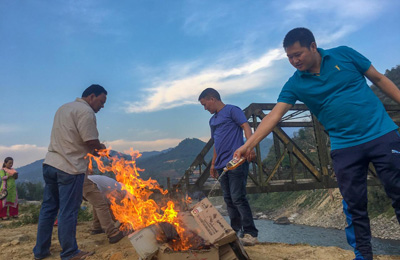 SEPPA, Apr 25: The East Kameng district liquor monitoring squad (DLMS) has destroyed all the liquor bottles that had been seized during the simultaneous elections in the district.
The bottles were destroyed here on Thursday by a committee led by DLMS nodal officer Dahey Sangno, in the presence of WWO and other committee members.
More than 1900 litres of IMFL, beer and other alcoholic beverages worth around Rs 2.5 lakhs were seized by the flying squads, the static surveillance teams, the sector magistrates and the DLMS during the elections. (DIPRO)