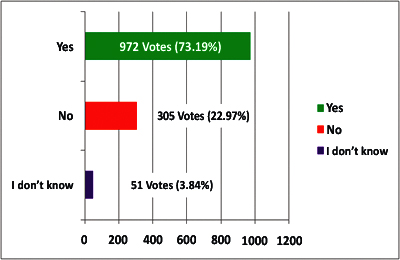 1. No, because so much has already happened. The public acted very injudiciously and inappropriately, making it uneasy for the voters who had come from far-off places to vote as the situation started getting tense after the actual polling took place and people who had to hurry back home or to their places of work were scared to return. Also, there was harassment to the office workers who worked day and night for smooth running of the election process at the headquarters as their duties increased due to the repeated violence by parties’ workers. I believe the EC must not submit to all these reckless violence and be done with the election procedure as per schedule.
2. Of course not. Instead of suspension, the election commission has to direct the state and the district administrations to beef up security with more armed forces, so that violence could be controlled and due process of elections continued. If elections can be conducted in areas facing armed conflicts, why can they not be conducted in Kurung Kumey?
3. Fresh elections should be conducted in the winter season to avoid both manmade and natural disasters as the pre-monsoon season has already set in.
4. How can you curtail the democratic rights of the innocent people? Instead, those who are disturbing the democratic process should be tamed.
5. The situation seems to be worsening with every passing day. As such, the ECI’s intervention is necessary to prevent further loss of precious lives. The ECI should also pursue the matter of financial involvement as it is pretty clear that the voters are being bought with more than lakhs of rupees.
6. There is no point in conducting elections in an area where people don’t want to be in a democratic system. A real shame for the people of this district.
7. I don’t support the suspension of elections. Suspension will never cure the virus of violence in Kurung Kumey because if elections are held later, the same people with the same mentality and the same goons and the same violence will do a repeat. Instead, not only enough but excess army and police forces should be deployed at every polling station, as well as in all vulnerable areas. Why is there is violence during elections? It’s because of booth capturing. Why does booth capturing occur? It’s because the forces cannot handle the gundagiri. Why can’t the forces handle the gundagiri? It because the forces are less in number. So, deploying an excess number of forces would be the appropriate solution to conduct peaceful elections, not suspension.
8. The best person to judge the matter is the DC of the district and the state electoral officers.
9. In the near future, Arunachal should hold the assembly election in two phases, ie, one day for the rest of Arunachal and the other for Kurung Kumey (where money is more precious than human life) with all the needful security arrangements.
10. When will the people in Arunachal Pradesh understand not to take politics so personally? It’s such a shame that in the name of politics, people are killing each other, destroying properties and creating enmity in the villages. It puts the particular tribe belonging to the district in a bad light. It will set the wrong precedent if the Election Commission keeps mum on the ongoing violence in the district. People should realize that they cannot repeatedly demand for re-poll by creating ruckus at the polling stations.
11. All the contesting candidates are actively involved in violence as well as booth capturing, and blame-games are being played for political mileage. It’s affecting the people living in that district, and causes loss for the state government exchequer. If possible, candidatures must be cancelled.
12. The ECI should definitely suspend the elections in Kurung Kumey and further action should also be taken by disqualifying both the candidates for life and then re-conducting the elections within the next six months.
13. The EC should rather disqualify the candidates. They themselves have encouraged all this violence.
14. More the suspension, more the flow of money, more the involvement of money, more the chances of violence; so for the best, complete the re-poll as soon as possible by deploying strong numbers of security forces.
15. Hooliganism and vandalism are not a way to elect a representative. All these nefarious activities lead to loss of compassion and bring a bad name to people of that area. Elections should be conducted fairly and within the guidelines of the EC. No one is above the law.
16. The election process should not be suspended; rather, the miscreants should be dealt with iron hand.
17. No. The election commission should provide enough security personnel for free, fair and peaceful elections. It should wrap up the electoral process; otherwise it will cause wastage of money and time for all sections of society.
18. Not just for a few months. There is no respect for the election process. Elections should be indefinitely suspended in KK district till a healthy environment is established for conducting elections.
19. The ECI should pass a law by which the polling stations to undergo second re-poll should be sealed and blacklisted forever, so that they do not take the election process for granted. Also, hereafter, the action taken by the district magistrate and the police department should be very stringent – one of them being snatching away the adult franchise of miscreants and their family members from participating in the coming elections. So done with this election shit!
20. No, the candidates contesting and responsible for the violence should be suspended from contesting. The root of the problem should be uprooted.
21. Absolutely. They should be suspended not only for a few months but permanently. Due to the failure of the election commission, this violent situation is getting worse day by day.
22. Cancellation of candidates required.