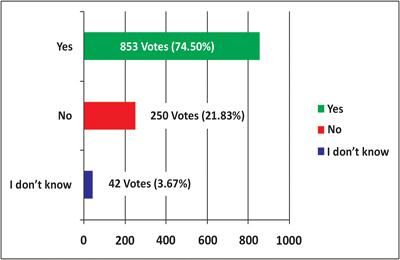 1. Absolutely. Had it been implemented properly, the scenario of the results would have been much better. The higher authorities need to revive the rules and prioritize the education sector. The education system has been in a shambles and it’s disheartening seeing the poorest of scenarios in the most important field of life. Hope the authorities concerned will take immediate and effective remedies to solve this never-ending poor condition of our education system.
2. A pre-board exam will definitely help, but the ultimate solution is to check the potential of the subject teachers also. If we go deep into the deteriorating performance of the CBSE results in our state, the major problem in our education system is incompetent subject teachers. Large-scale political appointment of undeserving candidate as teachers in Arunachal could be one of the main reasons for such poor performance in the CBSE exams by the students.
3. Absolutely no. Every student should be given an equal chance to appear for the board exam. Rather than a pre-board selection test there should be compulsory mock test/exam to test the students’ preparedness before the final board exams.
4. These days’ kids are not serious about studies. But it’s not only the kids to be blamed because most of the government schools lack basic infrastructure and teachers, which is due to the lackadaisical attitude of the state government.
5. There won’t be any change in the results until and unless the teaching community takes the responsibility in their hands. Pre-board tests will be useless if there are no teachers in the schools to complete the syllabi in the first place.
6. Exams are not important. What is important is regular class, effective teaching, and regular counselling or motivation for students.
7. It will only filter out good students, which will improve the pass percentage, but what about the rest of the students? Give more importance to weekly class tests to prepare them every week, rather then just opting for selecting the good ones.
8. Yes, it should be there. It is not only the students, the teachers should also be held responsible for the poor results. They are supposed to check the weakness in every child and try to work on those areas. Instead, they focus on only those who are already talented, leaving behind students who are poor in studies.
9. There should be a pre-board exam for Class 10, but instead of preventing the failed students from writing the board exams, the failed and the weaker students should be properly nurtured and helped, so that they can qualify for the board exams. Teachers and parents should come together, so that those who fail in the pre-board exam can be properly guided. Class 10 students are not mature enough, and are very sensitive. Instead of barring them, help them. Give them a fair chance.
10. The education scenario has deteriorated. Pre-board selection will not help. Stop nepotism while appointing a teacher. Selection based on merit should be initiated. Drug addicts and ineligible teachers should be shown the door.
11. My response to this question is a big no, because of the fact that any educational institution is not supposed to be a mere calculator of the quantity of end products, but it is built on the principle of inclusive growth and development of its integral components (students). The process involved in achieving this inclusive growth is a continuous one. Moreover, a pre-board selection test was conducted last year too, but the state failed to implement it. The CBSE Class 10 results are expected to improve in the years to come with better infrastructure, governance, parent-teacher coordination, and student-teacher behavioural changes and its ratios. However, pre-board test should be introduced as an assessment test, not as a selection test.

12. Most of the students have no idea about the board exam – how to manage the time and attempt the questions. This lacuna is one of the major reasons for the cause of the less pass percentage. Yeah, introduction of the pre-board system will acquaint the students with the nature of the CBSE board exams and our state’s educational reputation can be improved to a large extent.
13. Just to increase the pass percentage, people are demanding for pre-board tests. Will implementing these pre-board selection tests really improve the education scenario in our state, or will it just show improvement in numbers?
14. Sometimes I doubt if our brilliant kids can even read and understand this question? They are probably even clueless about the existence of this news portal.
15. Yes. However, it shouldn’t be a selection-based test. If such sieving action is made, I’m sure maximum students, especially from government schools, would get retained, meaning more pressure, indirectly or directly, on parents, school managements, the government and student life. We need a complete reformation in our education system, starting from kindergarten. The government alone can’t; parents should inculcate extra efforts.
16. Those who fail in the pre-board exam should be encouraged through remedial coaching.
17. Pre-board tests will not make any difference in the results unless there is awareness among the teachers, parents and the students themselves. Apart from the lack of teachers in government schools being a factor, irresponsible parents and students themselves are also leading factors. The Arunachalee community gives more emphasis on partying, drinking and merrymaking, rather than creating a study environment in homes for the school-going students. Every year, when the results are out, we cry over spilt milk and then forget about it in a few months.