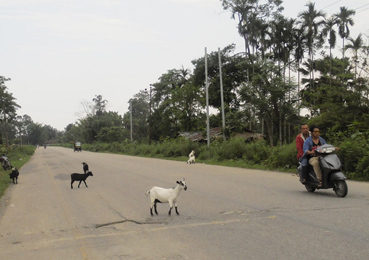 Correspondent
PASIGHAT, May 21: Domestic animals, particularly cows and pigs, which are allowed to roam free by their owners, have become a great nuisance on National Highway (NH) 15 between Ruksin and Pasighat in East Siang district.
These domestic animals, particularly the cows, can be seen standing or sitting on the middle of the road, causing traffic congestion and accidents.
This is a regular phenomenon in Leku, Sille-Oyan, Rani and Berung portions of the highway, and even within Pasighat town.
The cattle owners allow their animals to roam free on the highway day and night during the monsoon season, on the pretext of lack of grasslands.
The municipal body and the highway authorities do not pay any heed to the problems created by the stray animals, which is causing concern among the people.
The district administration had earlier launched a drive against stray animals and penalized several owners. The locals feel that such drives should be continued to get rid of the stray animal problem.