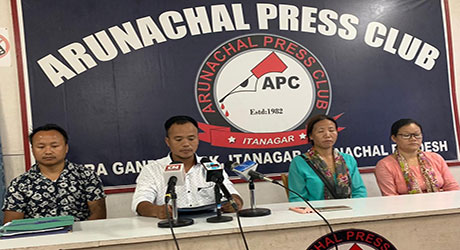 Staff Reporter
ITANAGAR, Jul 2: Even as new Home Minister Bamang Felix is preparing to launch the much touted ‘Humara Arunachal’ campaign, the Arunachal Pradesh Police Compassionate Aspirant Victims (APPCAV) on Tuesday appealed to the state government to appoint the candidates who have been waiting to be appointed in the police department on compassionate ground.
In a press conference at the Arunachal Press Club here, the aspirants urged the government to immediately start recruiting them on compassionate ground.
“On 14 November, 2015, the police department had advertised 241 posts, from head constables to washermen, for those whose guardians had died in service, on compassionate ground. However, till today there is no progress,” said Nyaku Haging, representing the candidates.
Haging claimed that the aggrieved aspirants and their families have been “unnecessarily harassed by the higher authority” by keeping the recruitment of the aspirants in abeyance.
“After the posts under compassionate ground were advertised, the physical verification of candidates was also done. But we don’t understand why the department is taking so much time to recruit,” Haging said.
He requested the department and the authority concerned to understand the pain of the families whose bread earners have died in service.
“We are facing problems in ensuring sustenance of our families after the breadwinners passed away. However, we are being given false hopes by the authority for the last four years,” said Jalamu Miji, whose constable husband, K Miji, died in service in 2011.
“We filled up the forms and completed all the procedures for appointment, but we are still waiting without results,” said Nangbia Yatup.
“Every time, when we enquire about the applications, the staffers at the police headquarters say that our case would be considered after a few months. But it’s been four years now; we are being humiliated, harassed and denied our rights,” Yatub added, and appealed to the chief minister to address their plight.
“After four years, now they are asking for the ’cause of death’ certificates of our guardians. This is purely a delaying tactic,” said Kirdo Taluk, whose father died in service years ago.
Reportedly, there are more than 700 candidates waiting to be appointed on compassionate ground.
The then chief secretary, Shakuntala D Gamlin, had reconstituted a six-member committee, with the director general of police (DGP) as it chairman, to examine all the cases of compassionate appointment.
The home department has directed the DGP to strictly follow the scheme for compassionate appointment, as notified by the state government vide OM-4/2001, dated 4 July, 2001.
The home department stated that the proposal of compassionate appointment has been examined by the administrative reforms department, and advised that the procedure for appointing on compassionate ground is clearly mentioned under Para 12 of the scheme.