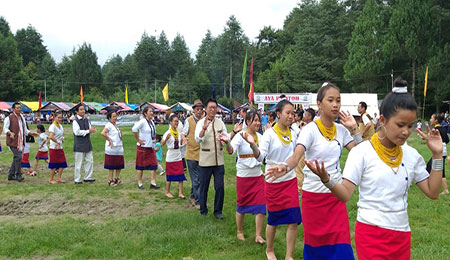 Staff Reporter
ITANAGAR, Jul 5: The Apatani community across the state celebrated the agricultural festival of Dree on Friday with an array of cultural programmes.
In the state capital, the Capital Complex Dree Festival Celebration Committee hosted the 45th Dree celebration at the Dree ground near here at Papu Nallah.
Attending the festivities, Home Minister Bamang Felix appreciated the efforts of the community for presenting the cultural diversity of the state by both the young and old.
As Home minister, Felix stressed on the necessity of the community based organisations in maintaining harmony in the society.
“Our state has witnessed political disturbances and sense of uncertainty in the past few years, but today Arunachal is one of the most stable governments in the country,” he said and assured of peace and tranquility.
Taking the opportunity to highlight about the Home department’s initiative to curb crimes, Felix informed that the department will be launching the ‘Identification Registration’ on 7 July here in and around the Capital Complex “at the Dorjee Khandu Convention Centre, VKV schools, Nyikum Niiya hall, etc.”
Seeking the cooperation of all, Felix said the registration should be seen as a measure to assist in identifying criminals, if any.
Also informing that the country will complete 75 years of independence in 2022, and that Arunachal will complete 50 years of statehood, Felix said that the state and central governments together aim to provide all of its citizens with “roti, kapda aur makaan by 2022.”
“I have also instructed the RD department to make sure that all people (of the state) should have a roof over their heads by 2022,” Felix, who also holds the charge of the RD department, added.
Besides cultural presentations on the day, achievers of the community, including students, sportspersons and social workers were felicitated by the committee.
At Lower Subansiri’s headquarter Ziro, the 52nd Central Dree Festival began with hoisting of Dree flag at the Dree ground in Nagu Putu by Central Dree Festival Committee (CDFC) chairman Nani Tani, followed by a reading of the Dree mythology by CDFC vice chairman Hage Pallang.
Attending as festival, Minister for WRD, Sports & Youth Affairs Mama Natung highlighted the importance of traditional festivals, and called on people of all ages to volunteer and actively participate in such festivals.
He also requested the MLAs of all the five districts (affected by the TAH issues) present, to “take up the construction of the highway seriously as the stretch of the said road, covering these five districts is in deplorable condition.”
He also honoured Rubu Yaja as the ‘Teacher of the Year,’ awarded by the Apatani Teacher’s Welfare Forum, and released a series of books, audio and video albums on the occasion.
Later, the minister launched the Rotavirus Vaccination (RVV) campaign on the occasion.
Besides speaking on the origin of Dree festival and its importance, Agriculture Minister Tage Taki also highlighted agricultural schemes.
He informed that under the national policy for transformation of agriculture system, a high power committee has been constituted in the centre, with Chief Minister Pema Khandu as one of its members.
“The dream to double the income of the farmers by 2022 will surely be achieved,” he added.
Colourful cultural programs, food festival were part of the occasion.
At Hong, Education and Cultural Affairs Minister Taba Tedir joined the people in celebrating the 32nd Dree festival at the Honako Dree ground.
Noting the gradual disappearance of rich cultural traditions and hymns, Tedir advocated for their documentation.
He also called on educated officers to volunteer and aopt schools to streamline the education sector.
“This will be a small way to pay back to our society,” he added.
The minister later felicitated meritorious students of Hong village.
Colourful cultural programs, the Daminda dance and traditional sports and food festival were the part of the programme.
At Lower Dibang Valley district headquarter Roing, the Apatani community there celebrated Dree with cultural dances, fashion show and felicitation of meritorious students.
Attending the programme, DC Mitali Namchoom praised the visionary leaders of the community who instilled the values and practices still being followed by the tribe, which has gained them fame, appreciation and a forward outlook that has created a good future for generations of youngsters of the tribe.
She also appreciated the womenfolk for their enthusiastic participation in organising the festival celebration.
Tapak Pertin, BJP district president also lauded the community for their inclusive celebration of the Dree festival at Roing.
Hage Tath, chairman of the celebration committee, briefly highlighted the Dree mythology and informed about the festival. Tage Tapa, gen secretary of the celebration committee also spoke on the occasion. (With DIPRO inputs)