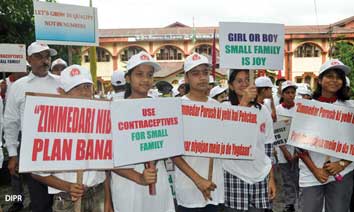 ITANAGAR, Jul 11: Along with the rest of the world, World Population Day (WPD) was observed across Arunachal with rallies and various programmes on Thursday.
The day is aimed at shifting focus towards the urgency and significance of issues related to population. This year’s WPD theme is ‘Parivaar niyojan se nibhaye zimmedaari, maa aur bacche ke swashthya ki puri teyaari’.
In Naharlagun, the State Health Society organized a ‘rally-cum-meeting’, which was flagged off from KV No 1 there.
Health Minister Alo Libang, who attended the programme, said, “The growing world population is a serious issue before us, and we need to be aware of ways to check and control the catastrophic growing population which will certainly lead to economic imbalance in the world, India in particular.”
Family Welfare Director Dr A Yirang informed that the world’s population has reached 7.023 billion, with China being the most populous country with a population of 1.41 billion.
“India is the second most populous country, next only to China, and has already crossed 1.34 billion as per the 2011 census, and it is estimated by experts that India’s population will overtake China’s by 2030. Therefore, it becomes a serious concern for all of us to check and control the rapidly growing population, and for this we have to adopt and follow awareness campaigns on education, medical methods like use of contraceptive tablets, tubectomy, etc, to maintain a small family, a balanced economic growth with balanced growth of population, thereby improving the people’s quality of life,” Dr Yirang said.
Dr Runi Tasung spoke about the comic book titled Arun-Aachal, on adolescent health, which has been written under the initiative and guidance of former health & family welfare secretary Kinni Singh, and was released by Libang on the occasion.
In Upper Siang district, DC Karma Leki launched the event at the district hospital in Yingkiong, and urged the people to adopt the ‘Hum do, hamare do’ principle and discourage polygamy to control the ever increasing population of the country.
The DC also urged parents not to allow their daughters to marry before the age of 21 years, and asked the district’s ASHAs and anganwadi workers to disseminate knowledge about the contraceptives being provided by the health department.
Earlier, a rally to mark the occasion saw the participation of hundreds of anganwadi workers and helpers, members of the ABK Women Welfare Society (ABKWW), students and health officers, led by the district’s NHM programme officer.
DRCHO Dr Appir Apang spoke on the importance of the day, and OBG Dr Etuk Jopir made a PowerPoint presentation on family planning methods.
ABKWWS president Oma Pertin also spoke.
Among others, ICDS DD (in-charge) Pakkar Nomuk attended the programme.
The Papum Pare DHS observed WPD at the health & wellness centre in Yupia.
ADC (HQ) Tabang Bodung inaugurated the programme and also launched the Population Stabilization Fortnight, in the presence of DMO Dr Subu Tasso Kampu, DRCHO Dr Worar Taku, and others.
Bodung highlighted the effects of high population on the socioeconomic status of the people and the state, and advised those present at the function to create awareness on the need to control the population growth through family planning methods.
The DMO urged the medical staffs, especially frontline health workers like ANMs, ASHAs and AWWs, to disseminate information at the community level about adopting family planning methods like temporary and permanent sterilization.
She informed that OCP, condoms, ECP, etc, are available at all the health facilities, and that Antara injections are available at some of the health facilities where trained doctors are available.
Earlier, the DRCHO highlighted the importance of the day. (DIPROs)