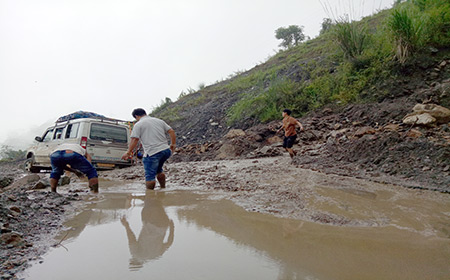 DAPORIJO, Jul 16: More than 500 vehicles were stranded for at least three hours on the Hoj-Potin road here in Upper Subansiri district on Tuesday.
Rain-triggered landslides and mudslides are occurring on a daily basis on the road, creating hardship for commuters to and from Kurung Kumey, Kra Daadi, Lower Subansiri, Kamle and Upper Subansiri districts.
Several vehicles are stranded and forced to line up in queues every day on the Hoj-Potin road. Very often, private earth movers (JCB) are hired to clear the mudslides, with the motorists having to bear the hire charges.
The hire charge is collected from every vehicle owner or driver and handed over to the JCB drivers.
“Commuters should take care of themselves while driving on this road. They should especially take care of shooting stones and landslides,” said a commuter, and advised bike riders to use helmet and avoid using earphones while riding on the road.
The general opinion is that commuters should avoid travelling on the road unless they have urgent reasons to do so.

Water supply disrupted
In Upper Siang district, the Yubbi and Yingkiong Sipat sources of water supply to Gette village were disrupted due to heavy rainfall on 12 July.
Yingkiong-II PHE&WS Section JE Boni Perme informed that restoration works are being undertaken to restore the water supply at the earliest, the DIPRO informed.